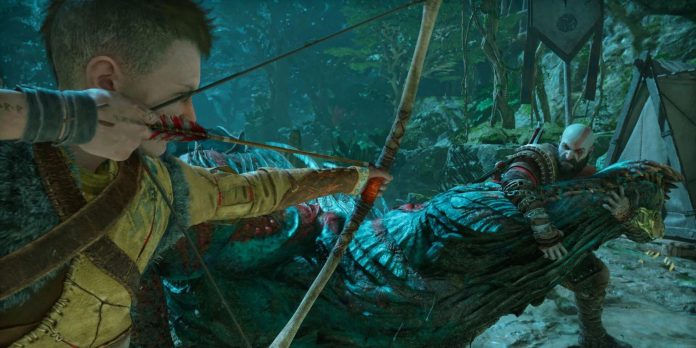 Sony is introducing a new limited edition of the God of War Ragnarok PS5 DualSense controller on State of Play. Many fans did not expect Kratos and Atreus to appear here, as it was not the expected PlayStation Showcase presentation, and it was announced that it was focused on Sony’s Japanese partners. However, every event needs to reveal “one more thing,” and Sony has unveiled two.

A new trailer for God of War Ragnarok was shown, which focused on the story and how Atreus seems to be taking on the lead role. It depicts Kratos fighting Thor, depicts a mysterious figure who is probably Odin talking to Atreus, and highlights the leading pair shooting at the sun along with Fenrir. Much remains unsaid, but Sony has revealed a few details about the controller.

Before the trailer was shown, Sony showed off a new controller (as shown below). This DualSense is blue and white, which corresponds to the general color scheme of the Scandinavian adventures of God of War, and there are two wolves in the center. It is not yet known whether these two wolves somehow represent Kratos and Atreus or they represent Atreus and Fenrir, given Atreus’ hidden name in God of War.

Fans should know that this is a limited edition controller, which means that God of War Ragnarok fans should act quickly to block it. The controller comes out on a day and date with a new game, November 9th, and pre-orders for it live in two weeks, September 27th.

However, it is noteworthy how little the God of War Ragnarok gameplay was shown. The story trailer is no doubt welcome, and this controller is no doubt tempting, but both must somehow connect to the gameplay. Sony and Santa Monica revealed some details about the God of War Ragnarok battles, but so far it hasn’t been much, just a few minutes of gameplay shown here and there. The trailer gives a few more glimpses, but still nothing serious. Many fans are probably still hoping to see more this month.

After all, this state of play was focused mainly on partners, not on their own games. God of War Ragnarok was a surprise here, but many expected it to appear on the PlayStation Showcase. There have been a lot of rumors about the PlayStation Showcase, and not about the State of Play, and many think that it will still happen at the end of this month. Perhaps the gameplay will be in the spotlight after this state of play sets up everything else, including one of the ways fans interact with this gameplay.

The movie “Everything is Everywhere” returns to theaters with an expanded...