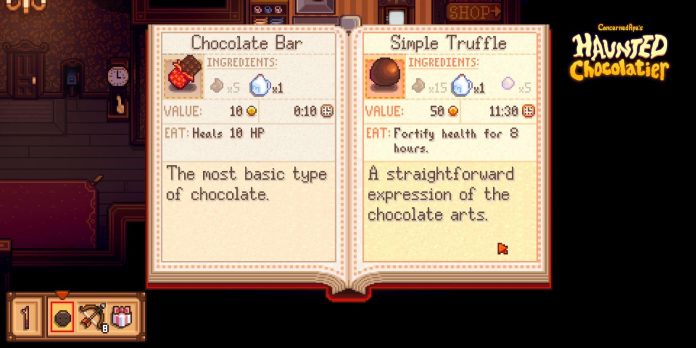 In the upcoming ConcernedApe game, Haunted Chocolatier, there is a shop management mechanic where the player can sell — unsurprisingly — chocolate. They can travel to different biomes to collect the right set of ingredients and experiment with them in the mansion. Already, it sounds like a fun game cycle where players are constantly trying to put together the perfect collection of sweet treats.

Despite the fact that the release date of Haunted Chocolatier has not yet been announced, Stardew Valley fans are looking forward to the announcements. The community is also talking loudly about what features they want to keep, as well as new mechanics that can be added to the game. Some are hoping for an extensive list of recipes — from chocolate to sweets and much more. After all, Haunted Chocolatier shouldn’t be limited to just chocolate.

In a recently released screenshot of Haunted Chocolatier, the player fights a boss bee inside a giant honeycomb. This tells the players a little more about the combat mechanics of the upcoming game, but, on the contrary, there was not much information about the features of the game in the store. An early gameplay trailer and old screenshots allowed the community to take a look at the chocolate shop and how it works, but that was it. This leaves the community plenty of room to theorize what the elements of making chocolate in the game might entail.

One discussion revolves around potential recipes. Some screenshots of the Haunted Chocolatier from last year show the player’s recipe book containing detailed information on how to make chocolate bars and simple truffles. But even though the game is called Haunted Chocolatier, it doesn’t have to be limited to creating chocolate treats. The inclusion of other types of sweets in the recipe book, such as candies, chewable candies and perhaps even pastries, would allow for more variation in the cultivation of ingredients. It also gives players more freedom to customize their store, perhaps focusing on the types of sweets they like the most.

In addition, the game touches on the more mystical side of things. As ConcernedApe put it, Haunted Chocolatier channels the moon’s energy. This may mean that players may encounter unique ingredients that are used to make magical sweets. In the game, you can imagine something like Strange Bun from Stardew Valley – only less strange and more appetizing. Special items from Stardew Valley can also appear in Haunted Chocolatier. For example, a Void Egg can be used to make Void cakes or something similar.

Some players have also put forward the idea of seasonal treats, similar to how seasonal crops are grown in Stardew Valley. Maybe the offer of peppermint bark for the Winter Star Festival or pumpkin-flavored chocolate for the autumn season can bring more profit. This is a great way to encourage players to diversify their menu and continue to expand their list of recipes. Of course, the final recipes still depend on the ingredients needed. And given that the specifics of growing ingredients are still unclear, the community will have to wait for an official message from ConcernedApe.

But in general, the recipes of Haunted Chocolatier — chocolate or other — have great potential. Developers can include a lot of sweets in the game, which will allow players to create all kinds of treats. It will be very similar to becoming Willy Wonka, as some in the community put it. However, no matter what the final recipe list is, Haunted Chocolatier is sure to deliver a cosiness reminiscent of Stardew Valley. Players can build a chocolate shop of their dreams, as well as meet interesting characters and uncover the secrets of a new setting.

Resident Evil 3 Remake, How Much Has It Sold To Date?