Home Entertainment A guide to the actors and characters of Paper Girls: how do... 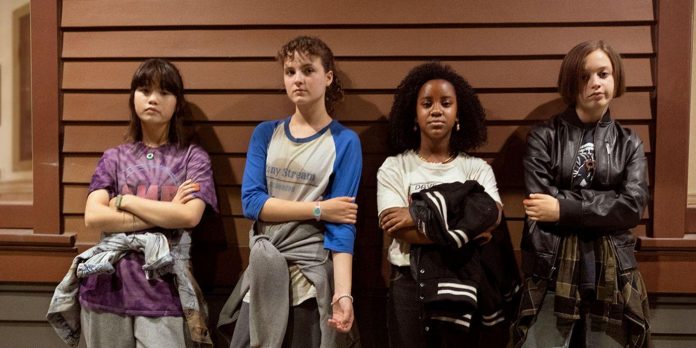 This article contains spoilers for the first season of Paper Girls.

Amazon’s Paper Girls series features a stellar cast of characters faithfully reproduced from the classic comic book series by Brian K. Vaughan and Cliff Chang. Comic book adaptations are all the rage right now, but fortunately, the industry is much more diverse than just Marvel and DC. Brian K. Vaughan and Cliff Chang’s Paper Girls may not be a superhero comic, but it has won several Eisner Awards, including several for colorist Matt Wilson.

“Paper Girls” tells about a group of four children who are transported back in time, unwittingly becoming part of a time war between two different generations. Although they don’t know it, the stakes are insanely high; unlike films like Back to the Future, time travel is dangerous here. If either side changes history too much, they risk destroying the entire space-time continuum. The original comics struck a delicate balance between the time mechanics of time and the surprisingly well-crafted character arcs as the four paper girls faced their (sometimes bitter, sometimes sweet) fate.

The Amazon Prime adaptation is surprisingly true to the Paper Girls comics, although it’s quite radically different by the end of the season. It features an excellent cast that seems almost born to play these characters, and all fans of the original comics will be thrilled. Here is a basic guide to all the actors and characters.

American actress Riley Lai Nelet (“American Housewife”, “Modified Carbon”, “Generation”) plays Erin Tieng, a “new girl” from the newspaper circle, whose first working day turns into madness. The Amazon TV series surprisingly accurately brings Erin to the small screen; she is a young Asian American with a strong maternal instinct who simply can’t help but try to take care of everyone. In the comics, Erin is cloned after being shot, and various generations of Erin’s clones help the Paper Girls as the story progresses; although the TV show follows the bullet wounds plot, it looks like cloning has been discontinued—at least in the first season.

Popular American stand-up comedian and actress Ali Wong (Ali Wong: Baby Cobra, American housewife and, of course, the star of “Tuck and Bertie”) plays an adult version of Erin Tieng, an unmarried woman who still works at Cleveland Preserver and who takes medication for anxiety. As in the comics, the two versions of Erin collide, and the 12-year-old girl is unimpressed with her future self. Ironically, Erin’s maternal streak turned out to be her undoing, since in the Amazon Paper Girls series, the split of her relationship is revealed in much more detail. Old Erin is destined for a much more heroic fate than in the comics, and she goes to great lengths to bring herself home at a younger age.

American actress and social media personality Camryn Jones (“Boys”, “Perpetual Grace, Ltd”, “Pete the Cat”) was ideally suited for the role of Tiffany Quilkin. An obsessive gamer who loves her walkie-talkies, Tiffany has struggled with racism for years, and she tends to be underestimated. The character isn’t particularly well-developed in comics, but Amazon’s Paper Girls adds another dimension by making her a future self, played by industry newcomer Sekai Abeni-the inventor of time travel. This is a major difference from the comics, suggesting that Paper Girls will completely abandon the arch in which children travel to prehistoric times and meet a completely different character who invents time travel.

Sofia Rozinski (“The Other Side of the Door”, “Boys Forever”, “Fast Lane”) is one of the most talented cast members of “Paper Girls”, who received the Breakthrough Director award at the Independent Film Festival in Hollywood for her short film “Fairy”. Her character, Mac, is a rough tomboy who has had a hard life and has always dreamed of getting out of her hometown of Stony Lane. The Paper Girls series follows the same arc as the comics, where Mac discovers that she has only a few years left to live, and she is destined to die of cancer. In the comics, the cancer Mac suffered from was a rare side effect of time travel itself, but it remains to be seen if time travel in Paper Girls will follow the same approach.

Fina Strazza, a native of New York, made her Broadway debut in the production of “Matilda: The Musical” and has since appeared in such productions as “Christmas Melody”, “Madam Secretary” and “Law and Order: Special Victims”. KJ’s path of discovery in Paper Girls focuses on the fact that she has begun to realize that she is a lesbian, and the Amazon series greatly enhances this story.

Stay alive: how the deleted scene of the second season explains...