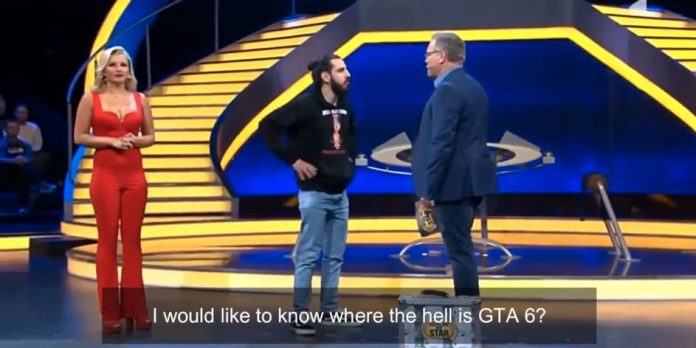 GTA fans can be very passionate. Especially the number of players waiting for GTA 6 is quite high. Although there are allegations and some leaked images for GTA 6, there is no explanation from Rockstar Games. This situation can drive some players mad.

Jumping on the stage, the actor asked the server, “Where the hell is GTA 6?” asked the question

The GTA fan who streamed the live broadcast of the German game show Schlang den Star introduced himself as Taser and asked the host Elton, “Where the hell is GTA 6?” posed the question. The female contestant was a little scared because of the way she stepped onto the stage. But Elton seems accustomed to this kind of interference before. Taser told Elton, “The best thing you can do is say this straight to the camera: Where is GTA 6?” said. Elton said, “No, I don’t need this. I haven’t even finished GTA 5 yet,” he said.

The reason behind the live broadcaster doing such a thing is that Elton has previously done German dubs of popular games such as Halo 3 and so on. Taser naturally thought that Elton might have an idea about the new GTA, even dubbing it in German. It is known that the new GTA is already being developed by Rockstar Games, but Rockstar Games is very quiet about it as usual.

Peaky Blinders: The interpreter of Ada Thorne paid tribute to the...

The Classic Doctor Who Has a Secret Connection to Raimi’s Spider-Man...