Home Tech A Flower-Like Formation Never Seen Before Has Been Discovered on the Surface... 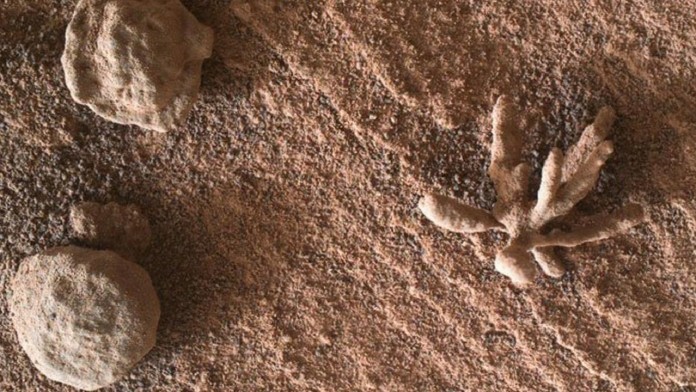 More quality and interesting images from Mars continue to come every day. Recently, a ‘flower-like’ object was spotted on the surface of Mars by the rover Cruiosity.
For many years, human beings have been researching space and life in space, and new information is emerging every day. Scientists often conduct research on Mars, too. In the past days, it has been announced that a new technology has been developed to accelerate these researches and transportation to Mars. With this developed technology, it is thought that it will be possible to reduce the transportation to Mars up to 45 days.

It is not known whether we can go to the neighbor and go to Mars in the future, but the Red Planet, which researchers frequently explore, not only surprises us with scientific researches, but also continues to fascinate us with extraordinary images. A photo taken by the Cruiosity rover this week was a little different from the others because it showed a flower-like object in the photo.

Named ‘Blackthorn Salt’ by scientists
Scientists who conducted research on this small flower-like object confirmed that the object was a mineral formation. The rover had encountered objects of this nature before, but they were usually found in the form of rocks. The researchers found that these mineral clusters are resistant to erosion. This flower-like object detected by the rover was named ‘Karaçalı Salt’ by the scientific team.

The Cruiosity rover’s camera uses a magnifying handpiece-like camera that geologists carry with them during field surveys. For this reason, scientists can clearly see the minerals and the texture of the object on the photo taken by the exploration vehicle. Scientists continue their research on this and similar mineral formations. It is not known whether there is life on Mars, but it seems certain that the Red Planet will continue to present us with beautiful images.

iPhone SE: The Only Feature That Makes The Model Tough Android...