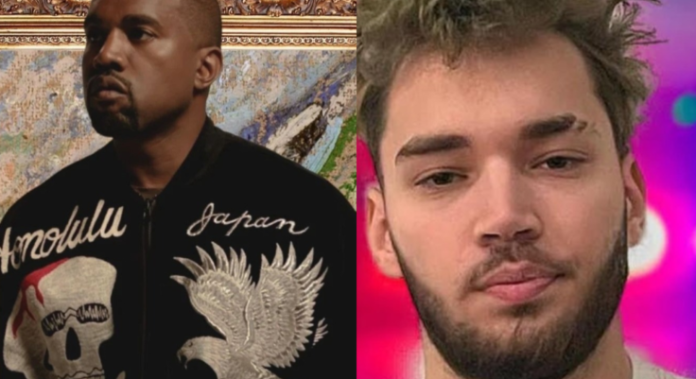 Will Kanye West give an interview to Adin Ross? Ye has been unstoppable with his arguments these weeks. The singer has been widely criticized after his anti-Semitic comments. After that, the singer was blocked on several social networks and broke off relations with several fashion houses.

However, the artist did not stop, even announcing his participation in the presidential elections of 2024. He even met with former President Trump along with political commentator Nick Fuentes, who is notorious for denying the Holocaust and making controversial remarks. After an explosive interview with Alex Jones, Kanye West will now give an interview to streamer Adin Ross.

West recently blew up during his interview with Joe Rogan, and he’s not done yet. Recently, the artist was banned from Twitter again after he continued to make accusations and controversial comments. He is now appearing on Adin Ross’s channel to give another explosive interview. Although the date of the interview between them has not yet been determined, according to a tweet, it will take place “this week.” The post was divided by comments on the news. In one of the comments in the tweet itself, they joked about an old photo of Adin Ross with braces.

Y’all ain’t have to violate Adin with that picture pic.twitter.com/QKTl3fyAmA

only one way this finna go pic.twitter.com/JbBXwyCp0B

Although there is already speculation about what they might discuss, the likelihood of it being controversial is quite high. Some people joked about how an influencer could be banned for interviewing Ye. Although Ross is also Jewish, and given Ye’s anti-Semitic statements, the interview can really go anywhere.

Ye will be doing an interview with Adin Ross this week, according to Nick Fuentes pic.twitter.com/HBsnKgbbDb

Ye will be doing an interview with Adin Ross this week, according to Nick Fuentes pic.twitter.com/HBsnKgbbDb

Ye recently completed his divorce and is currently busy with the presidential election. The Gold Digger singer is also often seen with Nick Fuentes. In fact, the latter could even join Ye in the interview. Recently, the rapper flew out of his interview with Tim Poole when the debate about Semitism flared up.

Could Ross take Ye’s comment any differently? What do you think? Let us know in the comments.

Guardians Of The Galaxy Was Going To Have Multiplayer, Finally Canceled