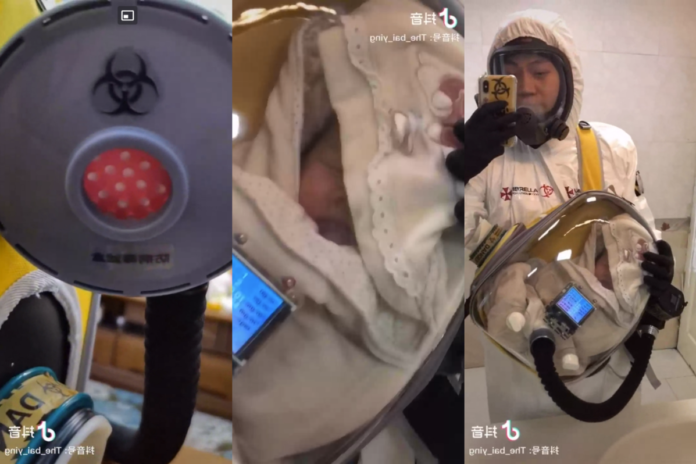 A father, a former cosplay artist living in Shanghai, China, designed a functional costume to protect his son from the virus, but the costume designed by the father was the same box as the baby in Death Stranding.

Death Stranding, the latest game released by Hideo Kojima, is known as a production that has earned the respect of everyone, even though it split the players in two due to its play style. Although those who do not like the game have their own reasons, there are not people who are inspired by the game in real life applications.

We came across a product that was developed with the inspiration of someone who loves the game. As you know, Corona virus (COVID-19) has been seen on all continents except Antarctica today. People are taking their own precautions while the virus has spread all over the world. A Death Stranding fan came up with the precaution he took to protect his child.

Inspired by Death Stranding to protect her baby:
In Shanghai, China, one of the places where the virus is most common, a Death Stranding fan has designed a box that is very similar to the box we saw in the game to carry her baby. This interesting costume designed by the game fan came out with the images uploaded to Douyin, China’s TikTok.

In fact, the person who made this costume did not design a costume for the first time in his life. The man named Bai Ying, who we see in the images, is a person who has been a cosplay artist before. Bai Ying, who also made a statement about his costume, said that the box he designed was not just an image.

According to Bai Ying, the box the baby is carrying has an air filter inside and a screen that shows the condition of the air outside. The box is made of an old backpack with a plastic tab in front. Ying added a hole in the box to reach the baby anytime.

Bai Ying, who shared with the Corona virus and Death Stranding tags, actually explained the main purpose of the costume with these tags. Inspired by a game he loved to protect his own son, the father gained the appreciation of many with his functional costume design.

The 10 Songs Of José José That Will Remain In The...

Death Stranding for PC shows the world with a new trailer

The first visual from Payday 3 has been published!