Home Entertainment A fan remake of the Ocarina of Time Unreal Engine 5 has... 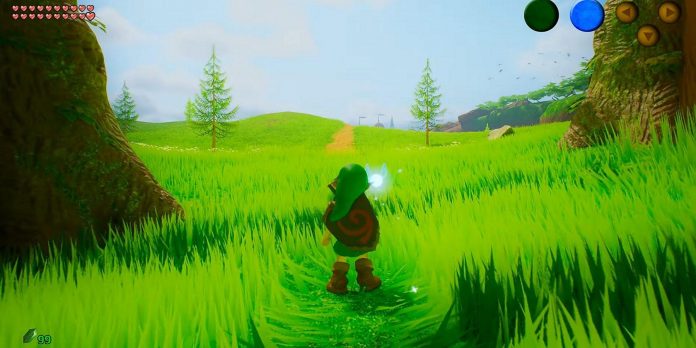 The Legend of Zelda: The Ocarina of Time, which has become a favorite game in the long-running Nintendo series, will leave pleasant memories for older gamers, so a user named CryZENx is currently recreating a classic game on the Unreal 5 engine. As one of the best 3D games of the 90s, the original release helped open a new era at a time when games were just getting on their feet. So perhaps it’s not so surprising that someone is interested in bringing back this quarter-century old version as an unofficial remake.

It is impossible to say when this fan project will be released, but the creator has released a new video showing what they have already done. As you can imagine, given the engine it’s made on, this upcoming iteration of the Ocarina of Time looks pretty amazing, with much more detailed visuals that give it a more modern look, complete with incredible water effects and lighting. However, despite the fact that the game has been moved to this modern era of the industry, it still retains the appearance of the source material, which makes it instantly recognizable to those who remember the release of the N64 at the moment.

CryZENx has clearly been working hard on its remake. In fact, a few months ago they released other videos showing the Ocarina of Time in Unreal Engine 5, in particular demonstrating the aforementioned water and lighting effects. For anyone who wants to support the developer, they have a Patreon page where the creator says that participants will get access to an early version of the remake for testing purposes. As mentioned earlier, the project doesn’t have a release date at the moment, but it certainly looks like things are going well.

In fact, CryZENx uses not only UE5. on the Ocarina of time on Unreal Engine 4, especially demonstrating the cooperative mode. Like this newest iteration, it takes a nearly 24-year-old game and reimagines it as something more modern, giving it a bit of visual impact without compromising the overall look of a classic role-playing game.

Unreal Engine is one of the most powerful game development tools on the planet, and it is used not only for fan remakes. In fact, there are a number of AAA-class games using the epic engine, such as the new Witcher game, Layers of Fears, Redfall and the new Tomb Raider part.

The Legend of Zelda: Ocarina of Time is available on 3DS, Nintendo 64 and Switch.