Home Entertainment A fan of Zelda: Breath of the Wild shared an interesting theory... 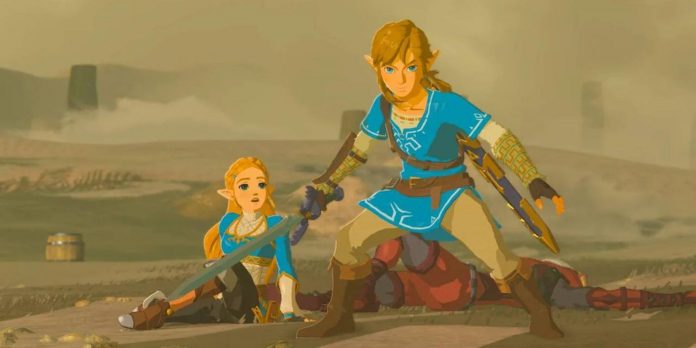 The Legend of Zelda: Breath of the Wild sees Link completely lose his memories after centuries of sleep following a Great Calamity. To remember his lost past, Link must travel all over Hyrule and find familiar places to revive his memory, launching a short cut scene showing the interaction between the key characters of Breath of the Wild in the years and days before Ganon’s return.

In most of these scenes, Link and Princess Zelda come to terms with Zelda’s abilities to seal evil, although others show the pair in more intimate moments with the four champions tasked with helping defeat Ganon. In one of these scenes, a Reddit user draws an interesting parallel.

RELATED: Zelda: Breath of the Wild Fan Bakes an Impressive Cake of Stump Crusts for Her Boyfriend

In a message in the r/Breath_of_the_Wild subreddit, the Brightfury4 user establishes a connection between two unlockable memories that were previously considered unrelated. In one, Link gets his right arm injured when he and Zelda are ambushed near Death Mountain, and Zelda expresses her fear of the return of Ganon’s Calamity. In another, taking place an unknown amount of time later, Mifa heals the same Link’s hand on top of the Divine Beast Vah Ruta as she recalls her first encounter with Link. As Brightfury4 points out, it’s possible that Mifa is healing the same wound that Link received in a previous flashback.

Some time ago I realized that the cut that Mytha heals in Memory #10 is probably the one Link got before Memory #8 from Breath_of_the_Wild.

Although these memories occur one after the other, due to the nature of the open world of Breath of the Wild, they are rarely acquired in the right order. So it’s not surprising that it took players some time to realize that these events could be related. As Zelda points out, this is not a serious injury requiring immediate attention, and therefore the memory of Link and Zelda exploring the wilds between these two memories does not necessarily violate the theory.

Some commentators appreciate the attention to detail, although others note that, as Mifa says, Link has a tendency to injury, and there is no guarantee that the injuries will be the same. As the user Lyalla notes, the developers probably didn’t want to waste time simulating a Link with another injury, and since the players don’t know how much time has passed between the memories, it’s hard to know if they are related. Nevertheless, it is a fascinating find.

Even more Reddit users are making a logical leap in the theories of the continuation of Breath of the Wild. Scheduled for release in 2023, the footage seen by fans shows Link with a blackened right hand, which makes commentators wonder why this particular hand always hurts. Some suggest that this is because Link’s right hand is not his sword hand, while others point out that, as in The Legend of Zelda: Twilight Princess, Link is right—handed. Be that as it may, fans can be sure that the discourse of the dominant hand will continue to penetrate the Legend of Zelda fandom for quite some time.

The Legend of Zelda: Breath of the Wild is currently exclusive to the Nintendo Switch.

Where To Watch The 2021 Emmy Winning Series Online