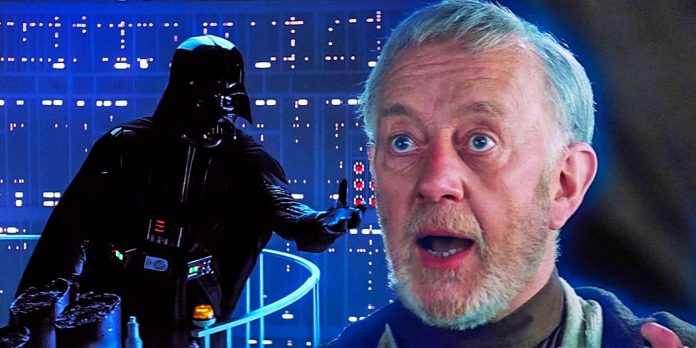 The act 3 plot twist in The Empire Strikes Back changed the course of the Star Wars saga, and while its secrecy was protected with a fake revelation, the trilogy could have been much darker if it was the real twist. Darth Vader’s infamous dialogue, which reveals that he is Luke’s father, Anakin Skywalker, is iconic enough to be known by those unfamiliar with the Star Wars franchise, but it wasn’t simply a twist for the sake of being unexpected. Vader’s revelation completely recontextualizes A New Hope and informs some of the most dramatic and poignant moments in its sequel, Return of the Jedi. What isn’t nearly as iconic, however, is the “twist” told to Mark Hamill during Empire’s filming, which would have taken Star Wars in a drastically different direction.

Darth Vader’s “I am your father” line is a meaningful plot twist that isn’t fully evaluated until its sequel, Return of the Jedi. Luke learns from his mentors that Obi-Wan feels responsible for Anakin’s fall to the dark side but also sees Darth Vader as a different person than his former apprentice (a sentiment reinforced in canon and Legends Star Wars material outside of the films). With this knowledge, Luke resolves to redeem his father rather than kill him, resulting in some of the franchise’s greatest moments. Luke uses his familial attachment to his father to bring out what good remains in Vader, making Return of the Jedi a remarkably satisfying conclusion to both the original trilogy and the story of Anakin Skywalker.

Related: What If Luke Became A Jedi & Killed Vader Before Empire’s Father Twist?

George Lucas and Empire Strikes Back director Irvin Kirshner preserved the secrecy of the film’s major twist from even the cast, with the purported false twist being that Darth Vader would say “Obi-Wan killed your father” instead of “I am your father.” While this wouldn’t have resulted in the same fascinating characterization that Luke, Vader, and Obi-Wan all receive in Return of the Jedi, it would have still been an unexpected twist that changes the course of the trilogy and, subsequently, the Star Wars saga. Considering that Obi-Wan is shown to be a heroic Jedi and kindly mentor to Luke, this would have taken the films in an unexpectedly dark direction, as Anakin was known up to this point as a good man who fell to Kenobi’s former pupil. Here’s how Empire’s false plot twist might have affected the Star Wars saga if it was the real one.

While it’s highly unlikely that Obi-Wan would be retroactively made a villain, the revelation that he’d killed Anakin would have disturbing implications in Return of the Jedi that would likely put him at odds with Luke Skywalker. For Obi-Wan to have killed Anakin, one of the two would have needed to turn to the dark side. In Anakin’s case, he might have fallen along with Vader (a separate character in this scenario), and his conflict with Obi-Wan would end with his death. If Obi-Wan fell, he might have fought against Anakin, who he kills before realizing how far he’s fallen, causing him to reject the dark side. In either case, his dynamic with Luke would become far more hostile once Luke learns the truth.

No matter who falls to the dark side, the duel between Obi-Wan and Anakin would have a far more macabre ending in this alternate saga’s version of Star Wars: Episode III – Revenge of the Sith. If Anakin falls to the dark side, Obi-Wan might have made the difficult decision to decisively kill him during the duel for the good of the galaxy, despite their friendship. If Obi-Wan had turned to the dark side, he’d have killed his friend, though perhaps not directly or in cold blood, as he’d need to return to the Jedi ways after realizing how close he’s come to the point of no return.

Darth Vader Being A Separate Character Would’ve Changed The Sith

Darth Vader and Anakin Skywalker being separate characters could also significantly change the Sith. Whether Obi-Wan or Anakin falls to the dark side, they’d likely have worked alongside the fallen Darth Vader, meaning that the famous Sith Rule of Two would no longer exist, as Emperor Palpatine is already revealed to be a Sith in The Empire Strikes Back. Palpatine might have orchestrated the downfall of both Vader and Anakin (or Obi-Wan), or simply didn’t object to more than one Jedi embracing the dark side. This would add more narrative weight to Obi-Wan and Yoda’s warning to Luke not to underestimate the Emperor.

Related: What If Han Solo Had Died In The Original Star Wars Trilogy

Star Wars Is More Morally Gray Because Of Obi-Wan

The Star Wars franchise, on the surface, seems to leave little room for nuance when the heroes and villains appear so clearly marked and absolute. Despite this, Return of the Jedi proves how well-suited the franchise is to moral gray areas more than any other live-action Star Wars film. In this alternate saga, however, this could still be the case, albeit in a far darker form. Obi-Wan killing Anakin would recontextualize Yoda’s words that the dark side will forever “dominate your destiny,” no matter who became corrupted. For Obi-Wan, his time on Tatooine would be more akin to exile as a way to return to the ways of the Jedi. In Anakin’s case, it’d be a sign that the older Jedi treat their enemies almost as ruthlessly as the Sith.

Darth Vader would be far less sympathetic in this version of the Star Wars saga. Without his background as Anakin, Luke might not be as motivated to redeem him. With Emperor Palpatine positioned as the saga’s main villain, however, as well as Vader’s connection with Anakin and Obi-Wan, he might form a looser connection with Luke, who perhaps sees his fall to the dark side as being comparable to that of Anakin or Obi-Wan. Vader would likely die by the end of Return of the Jedi anyway, but Luke (and thus the viewers) might see him as a far more complex character.

Darth Vader’s redemption in Return of the Jedi would not be motivated by Luke’s desire to save his father, but likely by the ghosts of Obi-Wan and Anakin revealing their experiences with the dark side to Luke. Luke might insist that Vader must be killed for all the damage he’s done to his family and the galaxy writ large, but Obi-Wan and Anakin would urge him to see the nuance in his fall, admitting that the old Jedi ways were flawed. The Star Wars saga would be overall darker if it used the false twist in The Empire Strikes Back, but it’d still end on a hopeful note for Luke and the future of the Jedi.