Home Tech A convenience for speakers with Sunny SeeTalk 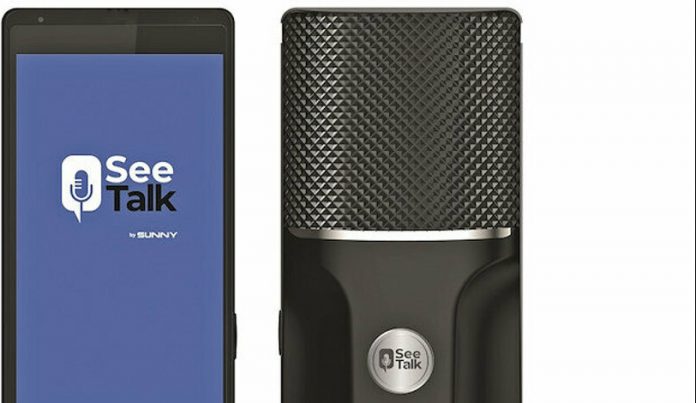 In order to make public speeches more impressive, it announced its new product called SeeTalk, which combines microphone and prompter devices. This new product, which is stated to completely eliminate the waste of paper, thus offers an environmentally friendly approach.

Sunny Elektronik’s Marketing and Product Category Director Arif Yıldırım noted that SeeTalk has been developed with nearly two years of intensive R&D work and successfully completed usage and market tests. “We made SeeTalk so that everyone can have effective and fluent speeches in front of the public and good ideas are understood by the crowds. SeeTalk has combined the prompter and professional microphone with superior technology and stylish design.

SeeTalk has a 5 inch touch high resolution LED screen, professional synchronous dual microphones, and a user-friendly Android interface. According to the company, SeeTalk helps to increase the command of the spoken text and to speak comfortably and fluently while speaking in front of the public. The screen of the product has a high contrast ratio. The size, color and background of the text can be adjusted according to eye comfort. Also, SeeTalk has a convenient and stylish remote. With this remote, the reading speed can be adjusted, the microphone can be turned on and off. You can navigate within the text of the speech and between pages SeeTalk can also be put into sleep mode when speaking is interrupted. It provides 6.5 hours of use, it can be connected to the computer via the microUSB port.

SeeTalk can pick up sound from a distance of 1 meter with little or no loss. It provides a clear, understandable conversation by preventing humming and sizzling. Wi-Fi and Bluetooth connectivity as well. Sunny states that this device can be used in places of worship for sermons and lectures, event speeches such as conferences, seminars, performing arts, stand-up, talk show and Youtube producers. In fact, YouTube producers were not considered when designing the product, but this audience also showed great interest.

Stating that the market tests of the product have been completed with 100% success, Yıldırım said, “As one of the first uses of the product in real life, our President of Religious Affairs made the opening speech with SeeTalk when the Hagia Sophia Mosque was opened again. In mosques where SeeTalk is used, we measured the community’s experiences regarding the quality of the conversation before and after SeeTalk. 92 percent of the respondents said that the conversations with SeeTalk were better quality and understandable. ” he spoke.

Sunny did not provide any clear information regarding the price of SeeTalk.

The technology of Super Bowl 55: payments with mobile