Home Entertainment A collaborative sci-fi simulation game is up for sale with a gameplay... 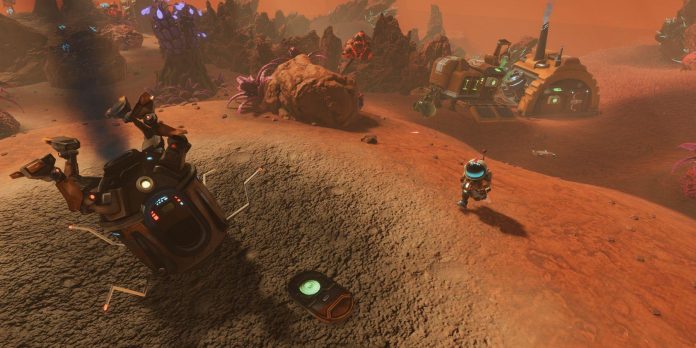 Friday’s THQ Nordic Digital Showcase 2022 event was filled with announcements of new games. One of the most interesting and unexpected discoveries is the cooperative sci-fi simulator of real estate development Space for Sale. THQ Nordic released a short trailer for Space for Sale, and then launched the game’s Steam profile, website, and Discord community, offering a reliable first look at what might be a game worth watching in the future. THQ Nordic clearly has high hopes for him.

As the name suggests, Space for Sale is a sci—fi simulator in which players build real estate on alien planets to sell it for profit. Playing from an isometric perspective, players control a tiny astronaut. They send their astronaut to procedurally generated landscapes where they will gather resources and build increasingly complex (and valuable) buildings and estates. After all, aliens are very demanding. Meeting the demands of aliens, working with harsh landscapes and using money efficiently are just a few of the challenges that players will face in Space for Sale.

There is, of course, another important feature that Space for Sale players will want to use to the maximum. Space for Sale will have full support for a cooperative multiplayer game with the ability to enter and exit with up to two players. It is unclear exactly how the cooperative will work, but it is assumed that players will be able to collect resources and build on their own. How the sale works and who makes a profit from the sale of real estate will be studied in future materials of Space for Sale.

Although nothing has been announced about Space for Sale yet, some assumptions can be made based on the knowledge of the game developer. Mirage Game Studios is based in Karlstad, Sweden. Mirage Game Studios’ previous project was Little Big Workshop, another simulation game in which players control a factory, including its workers, workstations and products. It’s easy to see how this experience will help create a Space for Sale design, albeit in a more accessible simulator style.

It’s also worth noting that Mirage Game Studios has always been part of THQ Nordic since the studio was formed in 2016; it’s not a third-party studio working with THQ Nordic. However, Little Big Workshop was published under the HandyGames publishing label, and Space for Sale will be owned by THQ Nordic itself. Perhaps this implies an additional level of conflict.

At the moment, Space for Sale has no announced release date. Thus, it may take some more time before more information about the sci-fi cooperative game becomes available. Of course, there are many other games to try in between: THQ Nordic is currently developing 43 games. However, the “Space for Sale” is worth a look.

Space for Sale is in development for PC.

Anne With An E: 3 Story-Related Series Fans Should Watch