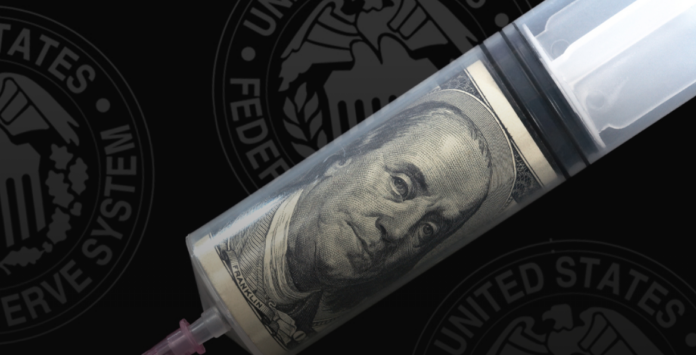 Studies show that the Federal Reserve (Fed) has taken advantage of emergency repo operations, injecting more than $ 9 trillion into the market since September 2019. A recent research report reveals the daily money flow of the Federal Reserve while showing that the Fed will not publicly share information about buyers with whom it cooperates to pump money into the market. Estimates are that 22% of the circulating US dollar was printed in 2020.

The goal is to save Wall Street

The reason the Fed was printing huge amounts of money in 2020 is to save Wall Street. “Is Hyperinflation Coming?” Posted on YouTube. After a video called Reddit, the US Federal Reserve started to discuss how it printed 22% of the US dollar in circulation this year alone.

“The US dollar has been around for over 200 years and was backed by gold for most of the time,” says one Reddit user. The printing of a quarter of all US dollars in circulation in a single year is more mind-blowing. ” His reaction by saying did not go unnoticed.

On October 1, 2020, Pam Martens and Russ Martens from Wall Street on Parade (WSP) published a comprehensive report on how the US Federal Reserve has injected more than $ 9 trillion into the market with bailouts since September. The findings show that the Fed also seeks advice from Wall Street hedge funds such as Frontpoint. On the other hand, Frontpoint Partners, which is a hedge fund, draws attention in terms of being a company that has been the subject of controversy in the past. It turned out that the company was downwardly suppressing the subprime mortgage market during the 2007-2010 financial crisis.

The most recent WSP analysis shows that the Fed is in talks with hedge funds and financial institutions such as Frontpoint to “gain input from the markets”. The Fed was leading an emergency authority from 2007 to 2010, and once again the central bank leads the three major emergency authorities. These are: Money Market Mutual Fund Liquidity Facility, Credit Facility for Market Makers and Commercial Paper Funding Facility.

The findings of the WSP show that the Fed, together with these authorities (as of September 17, 2019, months before the first Covid-19 case appeared in the US), started a massive emergency repo loan operation with the New York Fed, reaching a total of $ 6 trillion. is showing. Martens states the following on this subject:

The Fed provided data on the total amounts of daily loans, but did not name buyers. All he says is that the loans will go to the 24 main dealers, the trading units of the major banks on Wall Street. When we last computed their data in March, we see a cumulative flow of over $ 9 trillion to these trading houses.

There Is A US Dollar Losing Value As It Loses Value!

According to some experts, the huge injection of money by the Fed will cause hyperinflation at the end of the day. The dollar has depreciated significantly since the establishment of the central bank in 1913. For example, the cumulative inflation rate since 1913 is around 2.525.4%. This means that a product purchased for $ 1 in 1913 would cost $ 26.25 in October 2020.

Bitcoin, Other Cryptocurrencies and Precious Metals

Precious metals and cryptocurrency advocates believe that the Federal Reserve’s massive injection of money will support assets like Bitcoin and gold.

Pantera Capital CEO Dan Morehead said in July that he believes cryptocurrencies like Bitcoin (BTC) will help people in deep economic crises. In a letter to investors, Morehead emphasized that “the United States has printed more money than the first two centuries after its establishment.” he used the expressions. On the same day, 22-year congress veteran Ron Paul published his article “Two Hundreds of Debt in One Month” on Pantera Capital and said that the people of the US should be “prepared”.

Paul has been busy exposing the US Federal Reserve’s flawed policies for the past 20 years, and has been noted for writing extensively about central bank manipulations.

The transformation of Marilyn Monroe Ana De Armas into a blonde...