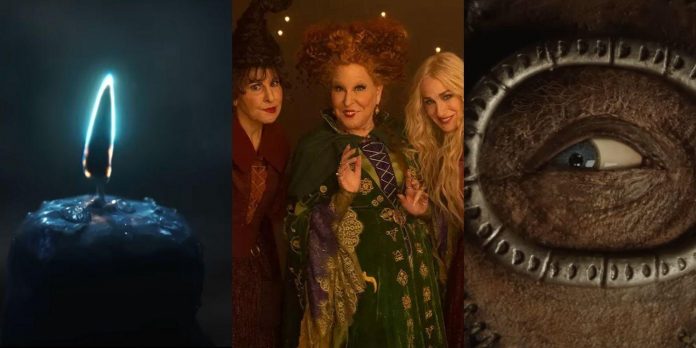 Recently, Disney presented fans with a brief overview of the sequel on the theme of Halloween, which they have been waiting for since 1993: “Hocus Pocus 2”. The original film has become a cult classic, and they like to review it on the eve of Halloween.

Disney was silent about the sequel, but assured fans that the three Sanderson sisters, Bette Midler, Sarah Jessica Parker and Katie Nagimi would reprise their roles as the three scariest (and funniest) loving children of witches. In the preview trailer, fans of the original learned more about what was to come, including the main storyline that brought the sisters back from the dead to Salem.

A new group of children

The initial “Hocus Pocus” focused on siblings Max and Dani as they got to know their new magical hometown of Salem. Max became close to his lover and classmate Allison, who later introduced the siblings to the Sanderson Sisters’ home.

There were several theories that Allison was a witch because of her connection to the Sandersons, but these theories were never answered. Allison, Dani and Max were absent from the trailer, but a new group of students took their place. According to the sequel’s IMDb, the three new main characters are Becca, Cassie and Izzy.

The birthday ritual brought back the witches

In the trailer, Cassie approached Becca and Izzy and wished Becca a happy birthday. When asked what she was doing to celebrate, Becca replied: “A birthday ritual, a horror movie marathon… just like every year.”

There were a few hidden details in the Hocus Pocus 2 trailer that went unnoticed, but the fact that it was Becky’s birthday and the girls were performing some kind of ritual was not missed by fans. Becca and Izzy were then seen in the woods singing the same thing the Sanderson sisters sang in the first film, which then split the ground beneath them before Winfred, Mary and Sarah were spotted.

Jacob Bailey High School is back… or isn’t it?

Since the Sanderson sisters lived and died in the same area of Salem, Massachusetts, it is assumed that Becca, Izzy and Cassie went to the same high school as Max and Allison—Jacob Bailey High School.

The school shown in the sequel trailer looked exactly like Jacob Bailey High School. However, a quick snapshot of the school sign proved otherwise. The end of the sign with the inscription “Skelton High School” is briefly shown. Could the sequel be in another part of Salem, or at least in another school district where the Sanderson Sister story lived?

The book is coming back!

While Becca and Izzy were singing in the woods, trying to resurrect the Sanderson sisters from the dead, Winifred’s Book appeared briefly. The book was a spell book owned by Winifred Sanderson. It is said that the book was made of human skin and given to Winifred by the Devil.

It was a good idea to create a sequel to Hocus Pocus so that fans could learn more about this mysterious character who gave so much to the Sandersons. Knowing that two students had awakened the Book—along with the Sanderson sisters—with their chants, the lives of the Salem children became incredibly dangerous.

16 years old and a new witch

Actor Sam Richardson appeared in a short scene where he is shown talking to students. According to CBR, Richardson plays a magic shop owner named Gilbert. He told the girls: “You know, according to legend, it is on the 16th birthday that the witch gets her powers.”

Given that Becca was able to resurrect the Sandersons from the dead, it could mean that she or Izzy is a witch. If that’s the case, it would be great to see a few actors from the original comeback helping the young girls beat the Sandersons, as it’s already been done once.

Strangely enough, there was something incomprehensible about Thackery. In the trailer for Hocus Pocus 2, a black cat similar to Thackery was seen loitering around the cemetery and the main characters. Could there be more people disguised as cats that the Sandersons once cursed?

Thackery Binks told Dani, Allison and Max that Billy Butcherson was Winifred’s ex-boyfriend. When Winifred found out that Billy was cheating on her with her sister Sarah, she poisoned him and he was buried in a nearby cemetery.

Billy came back to life before falling asleep again in the original, and it looks like he might make an appearance in the sequel.