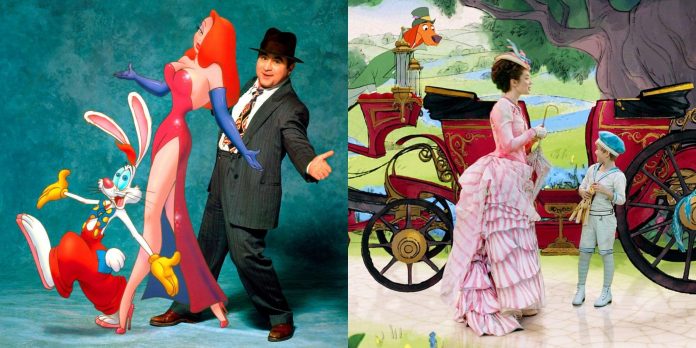 With films like Snow White, Sleeping Beauty, and an upcoming live-action remake of The Little Mermaid, Disney has always been in the business of bringing storybook fairytales from the page onto the big screen. So many movies and characters owe their existence to fables, fairytales, and literature that sometimes it can be easy to forget which versions came first.

Many of Disney’s best and brightest have literary origins, and some even predate the likes of Mickey Mouse himself. Although the studio didn’t necessarily create all of their beloved animated characters from scratch, the Disney name did pull many of these characters from the written word and into the public eye for a lifetime.

Anyone who’s ever seen Saving Mr. Banks will know that Walt Disney had to fight tooth and nail to produce a film adaptation of Mary Poppins. Especially since her author, P.L. Travers was so incredibly adamant about protecting her beloved character. While Disney was working on projects like Snow White and Pinocchio, Travers was creating and composing the practically perfect nanny with a flying umbrella.

RELATED:  10 Disney Characters Who Deserve Their Own Movie, According to Reddit

There are several differences between the book version of Mary Poppins and the screen portrayal by Julie Andrews, but it’s easy to understand why Walt Disney would want to adapt the book. Especially given Mary Poppin’s gift for wit, verse, and a subtle hint of mischief not unlike Walt’s own.

The Black Cauldron (The Chronicles Of Prydain By Lloyd Alexander)

Although it was panned when it was first released, nearly costing Disney’s animation department altogether, The Black Cauldron was an ambitious project that sought to adapt the entirety of The Chronicles of Prydain into a single adventure. Adapting five books into a film less than 90 minutes long was a fool’s errand from the start, but that doesn’t mean the effort wasn’t made.

The books by Lloyd Alexander were a dark swords-and-sorcery series that pulled from Welsh and English mythology, much like Tolkien’s Lord of the Rings. Disney was certainly bold to attempt an adaptation, but they were ultimately out of their element, especially with Jeffery Katzenberg cutting up the footage.

There are many Disney movies that fans have been begging for sequels to over the years, but one of the most probable choices might just be The Great Mouse Detective, as it wasn’t based on a singular outing. Basil of Baker Street didn’t just take inspiration from Sherlock Holmes, but rather his own book series by Eve Titus.

Inspired by the series, Basil of Baker Street, the film takes several characters and elements from Titus’s work. Characters like Basil, Professor Ratigan, Dr. Dawson, and even the visual of Basil living directly under Sherlock Holmes’s feet all appear in the books. With several other adventures, it’s a wonder Disney hasn’t brought Basil back.

Unlike his tumultuous partnership with P.L. Travers, Disney’s friendly correspondence with author Dodie Smith was how 101 Dalmatians came to be, as documented in Sincerely Yours, Walt Disney. The final result was one of the most stylish animated films of the ’60s. Pongo, Perdita, and the rest of their spotted spawn first hit the pages of Smith’s novel of the same name in 1956, and it soon caught the eye of the famous animator.

The film only takes one or two liberties with the source material, eliminating certain characters and scenes to save time, but the film follows the events of the novel remarkably well. Even the outrageous character of Cruella DeVil made her debut on the page before she chewed the scenery in the film and became one of Disney’s most iconic villains.

Tod and Copper might be the best of friends in the Disney adaptation of Daniel P. Mannix’s novel, but the source material paints them in a very different light. To say that the forgotten beloved Disney movie is a sugar-coated adaptation of a particularly graphic work of literature would be a gross understatement.

The phrase “out of the frying pan and into the fire” might be the aptest description of Tod’s ordeal in the original novel, as he is cast in the lead as the protagonist rather than sharing the limelight with his buddy Copper. Violent imagery, destruction, and even the death of cubs and children are all present in the original novel, definitely not something Disney would have in their adaptation.

Bambi (Bambi, A Life In The Woods By Felix Salten)

On the subject of woodland creatures facing danger in the forest, there’s perhaps no better-known example than Bambi. While the infamous shooting of Bambi’s mother will make any viewer of this Disney movie cry, that’s very minor compared to the stark, unforgiving narrative that Felix Salten wrote in the 1920s.

Granted, the events in Bambi’s life in the movie do come from the book, but it’s treated with a much sharper edge. It’s a very “Circle of Life” sort of story that has more in common with something like The Lion King than the Disney film featuring cute and cuddly animals.

Regardless of whether it’s the book or the movie, The Brave Little Toaster is weird. Originally published as a sci-fi novella by Thomas M. Disch, Disney didn’t add too much apart from the musical numbers and a few new characters and names (Kirby being called “Hoover” for example). Like the film, it’s a charmingly eccentric story that deserves more attention.

Toaster, Blankie, Kirby, Lampy, and the Radio are all present and accounted for in a literary sense, and their quest to be reunited with their beloved master is just as strangely heartwarming as it is in the film. Though it could benefit from some singing appliances.

Deems Taylor described it best in the opening sequence “The story came first and the composer wrote the music to go with it… A legend about a sorcerer who had an apprentice.” Although Mickey Mouse might be the face of the story nowadays, the original poem by Johann Wolfgang von Goethe was what inspired both the music and one of Mickey’s most iconic roles.

Although interpretations are open in terms of the music composed by Paul Dukas, the animated sequence from Fantasia follows the plot of the story quite effectively. Although Mickey’s magic hat is 100% a Disney addition, the brooms, magic spell, and furious master are all part of the original text.

It was one of the most entertaining films of the ’80s, but most casual viewers might not know that it came from an allegory for racist practices in the golden age of Hollywood by Gary K. Wolf. The original work, Who Censored Roger Rabbit, had the toons in a comic book setting, but many of the characters were retained.

That all being said, Disney definitely made the story their own and ventured off the narrative trail. However, Wolf was such a fan of the show that the sequel, Who P-p-p-plugged Roger Rabbit, retcons the original novel in favor of the events of the film.