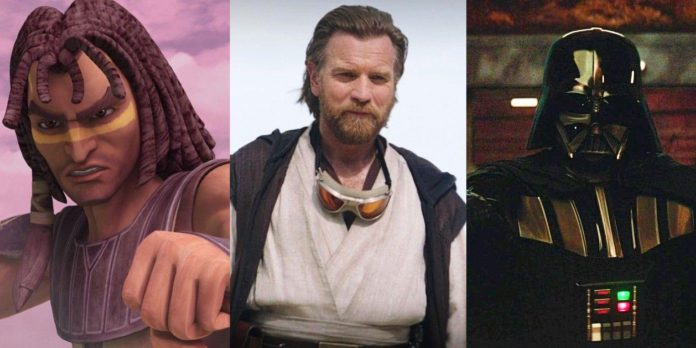 The Disney+ Star Wars series, Obi-Wan Kenobi reached its climactic conclusion, but there’s still so much that fans want to know about the character moving forward. Of course, while most questions will be answered by A New Hope, there are a few characters and narrative beats that have been left hanging and might never be concluded.

Of course, while a sequel series hasn’t been confirmed, there are plenty of other ways that LucasFilm could tell this story, from the comics and video games to the fantastic range of novels. Ultimately, while the show was stunning, these lasting queries are going to keep fans wanting even more!

Do Leia And Kenobi Meet Again Before A New Hope?

Star Wars fans are well aware that Kenobi and Leia will be reunited one last time, as she calls on the Jedi Master for help after being captured by the Empire, in A New Hope. There could be a chance that Leia and Obi-Wan could cross paths again before the events of the film.

It’s plausible that they have a few other run-ins, enough to continue to build the trust that the Princess and General has for the former Jedi Order Council member. However, if that is ever to be explored, it’s almost certainly not going to be on the same scale as the narrative in Kenobi, where Leia stole the show.

What Does Kenobi Do With His Remaining Time?

There’s still plenty of time between the events of Obi-Wan Kenobi and A New Hope. Some of that space is filled in with Star Wars Rebels, but there can be other narratives to fill in the gaps. The feud with Maul is, of course, a major point of focus there.

But surely there are other missions that Kenobi must embark on, to set the galaxy up for the eventual collapse of the Empire. The most likely mission could be concerning Cal Kestis, who is protecting the remaining secrets of the Jedi. If there were any other arcs after Kenobi’s conclusion, perhaps it will include the Jedi: Fallen Order character.

How Linked To Luke Is Ben Now?

Obi-Wan and Luke come face to face in the finale of the Disney+ streaming series. While Ben gives Luke a gift, it’s clear that the meeting is short, before the Jedi rides off into the desert. The duo could interact many times before Obi-Wan becomes Luke’s mentor in the Force in A New Hope.

The original Star Wars film did demonstrate that Luke was aware of the strange old man that lived out in the wastelands. This could be for a couple of reasons: Owen could allow Kenobi to return a few more times. However, Luke could forget about their early meeting and Ben thus becomes someone generally known around the town. The Legends Canon expanded on Luke’s childhood somewhat, but no one knows if Disney will do the same.

What Will Qui-Gon Teach Kenobi?

Qui-Gon Ginn’s surprising return indicated that Kenobi had finally learned the deeper secrets of the Force. The season ended with Kenobi starting a new journey alongside his master, who suggested that he could teach him so much more, now that he was in the right position to listen.

What else did Qui-Gon teach Kenobi during this time? Fans would love to see further scenes featuring the former Master and Padawan, now that Kenobi is all grown up in his own right. One trick Jinn must surely teach Ben is to become one with the Force, as he does in A New Hope.

What Will Reva Do Next?

Reva wasn’t the strongest of the Inquisitors, although she was manipulated into an untimely promotion as Grand Inquisitor, before being cut down by Vader. Her quest to kill the Sith Lord failed and she realized she had become exactly what she had hunted. However, it’s difficult to tell where the Force wielder will go from here.

The other Inquisitors may hunt her down, angry at her betrayal and longing to remove yet another potential Jedi from the table. Reva could turn over a new leaf and begin saving people, or she could remain consumed by anger and hatred for forever.

Where Is Quinlan Vos?

Quinlan Vos is a favorite among Star Wars fans and his stories have been conveyed in the comics, novels, and even Clone Wars series. His fate after Order 66 was a little ambiguous, but Kenobi revealed that the Jedi warrior was still alive and helping those in need.

It’s an odd inclusion for LucasFilm if they aren’t going to pay off that tease down the line. Sure it may open the door for Marvel to continue their incredible comic run with the Jedi added back to their roster, but perhaps there is a place for Vos on screen!

Will Vader Stop His Hunt?

Vader is of course the Sith that will slay Ben Kenobi in A New Hope. But does he spend all those years continuing his hunt? The answer is a little complicated, as all of the expanded material showcases a range of missions. His obsession with his former Master of course always remains.

The finale of Kenobi saw Vader put in his place by Palpatine, suggesting that for now, his feud with Kenobi has to be diverted so that he can continue to prove himself as a worthy servant to the Empire. If there is a sequel series, then Vader’s return is up in the air.

Has Haja Turned Over A New Leaf?

Haja was introduced to audiences as a con man, but he quickly came around when lives were at stake. He was always helping the innocent after all, he was just charging a steep price to do so and masquerading as a Jedi. His adventure ended essentially by joining the beginning of the Rebellion.

However, it’s unclear what fate has in store for Haja. It’s almost certain that fans will see the character again in some capacity, and it seems that his Jedi days are behind him. It’s a useful guise though and there’s always the hope that he might possess some late Force abilities anyway, fulfilling the self-prophecy.

Will There Be A Season 2?

There are just so many shows in the galaxy far, far away currently in development for Disney+, but could Season 2 of Kenobi be in the works? It’s clear that the series has been a success and fans would love to see more from the Jedi. It’s also obvious that the stars had a blast creating the show and would return.

The only thing holding back LucasFilm would be the lack of a story. If there’s no natural narrative to tell then they may not do another one. There was a natural conclusion to the first series, so if there is never a sequel then at least the show wrapped up quite satisfyingly.