Home Entertainment 9 Actors Who Have Appeared in both MCU and MCU Films by... 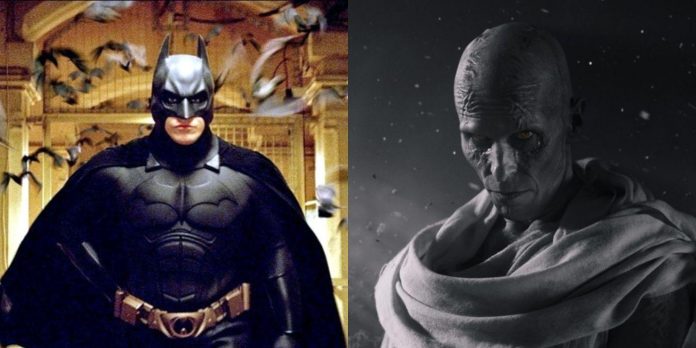 With Christian Bale playing Gorr the God Butcher in the latest Thor movie, the Oscar-winner joins the list of all actors who have been a part of Marvel’s superhero universe and Christopher Nolan’s directorial ventures. Bale plays a comic book villain in Thor: Love and Thunder and a comic book hero in The Dark Knight trilogy, and the antithesis of the characters is further evidence of his acting range in any superhero movie.

Aside from Bale’s portrayals, other actors have gone beyond the usual binary of heroes and villains. For instance, Aaron Taylor-Johnson and Scarlett Johansson have both played superheroes in the MCU but have had vastly different roles in the “Nolanverse.”

A starring role in Batman Begins proved to be a watershed moment in Christian Bale’s career. Even though he had been a part of critically-acclaimed movies like American Psycho and The Machinist, the method actor entered the popular conversation playing Batman in the two accompanying sequels. His post-Batman career also included award-winning turns in movies like The Fighter, American Hustle, Vice, and many more.

Bale’s second comic book outing as Gorr The God Butcher offered one of the MCU’s most humanistic villains. Even though Gorr vows to kill all gods in existence, his personal motivations behind the violence add more to the character’s grey areas.

Before she was Black Widow, Scarlett Johansson mostly appeared in lead roles in productions as diverse as Michael Bay’s The Island to Christopher Nolan’s The Prestige. With the latter being a period drama mystery, Johansson plays the assistant of the two protagonists of the movie both of whom are rival magicians.

Her career would skyrocket a few years later when she debuted as the SHIELD operative and master assassin Natasha Romanoff, aka Black Widow, in Iron Man 2. Since then, she has been a fan-favorite character appearing in numerous Marvel ensemble movies including her standalone adventure, Black Widow. Even though she has also gone on to earn acclaim for non-blockbusters, Black Widow continues to be Scarlet Johansson’s most iconic role.

Before he played a CIA handler in Tenet, Martin Donovan’s first collaboration with Christopher Nolan was with the 2002 psychological thriller Insomnia. Appearing alongside Al Pacino, Robin Williams, and Hillary Swank, Donovan played a Detective who investigates alongside Pacino’s lead. Ever since Donovan’s character stumbles upon the protagonist’s shady past, the plot starts thickening.

As for his stint with the MCU, Donovan plays Agent Mitchell Carson in Ant-Man. While initially introduced as the head of defense for SHIELD, he betrays the organization by turning towards HYDRA.

More recently, he was seen as a part of the Tenet ensemble. In Christopher Nolan’s polarizing sci-fi thriller, the actor appeared as the military commander Ives who aids The Protagonist in his time-bending adventures. However, Taylor-Johnson is all set to get back to the world of comic books as he’s slated to play Kraven The Hunter in the character’s self-titled 2023 movie.

Even though Memento is technically Christopher Nolan’s sophomore venture, it is regarded as the movie that put him on the map. The cryptic premise of this neo-noir deals with a man suffering from short-term memory loss as he tries to find his wife’s killer. Guy Pearce’s nuanced portrayal of the troubled protagonist drew much acclaim, and it remains one of his best roles to this day.

When it comes to the MCU, Pearce and the Iron Man 3 character Aldrich Killian have evoked more controversial reaction from viewers.  Killian’s final reveal as The Mandarin was a major shift from the comic books but added to the movie’s originality.

Otherwise known for his motion-capture performances, Andy Serkis played the part of Nikola Tesla’s assistant in The Prestige. Even though it is a minor role, it is interesting to see Serkis essaying a live-action role for a change.

Following The Prestige, Serkis went on to essay more mo-cap characters with occasional exceptions such as that of the black market arms dealer Ulysses Klaue in the MCU. Even though Klaue was introduced in Age of Ultron, his character was more fleshed out in Black Panther in which he also engages in a high-octane chase sequence with the titular protagonist.

Much like the rest of Christopher Nolan’s movies, The Dark Knight Rises boasted an exceptionally talented ensemble that even included noted actors like Ben Mendelssohn in bit roles. Mendelsohn takes on the role of John Daggett, a billionaire and business rival of Bruce Wayne’s who takes advantage of the mayhem caused by Bane.

The Australian actor joined the MCU with 2019’s Captain Marvel, appearing as a Skrull called Talos. Reimagined from the source material, this version of Talos can shapeshift, and Mendelsohn also plays his human version. Later playing out as an antihero, he will reprise his role in the upcoming Disney+ original series Secret Invasion.

Noted for his character roles in superhero and sci-fi productions such as The Suicide Squad, Dune, and Blade Runner 2049, character actor David Dastmalchian’s cinematic debut was in The Dark Knight. He plays Thomas Scriff, one of the Joker’s deranged goons who aids him in a plot to assassinate the city’s mayor.

In Ant-Man and its sequel, Dastmalchian played Kurt, a member of Scott Lang’s heist crew. To play the part of Kurt, he picked up a Russian accent and incorporated an Elvis Presley-like pompadour hairstyle.

2017 proved to be a career-defining year for Irish actor Barry Keoghan who blew away critics with a lead role in The Killing of a Sacred Deer and also joined the talented ensemble of Christopher Nolan’s war drama Dunkirk. In the latter, Keoghan played George Mills, an impulsive civilian teenager who tries his best to help the British naval forces during the War.

After establishing himself with a couple more character roles, he made his MCU debut alongside several other actors as he played one of the titular team members in Eternals. Capable of mind manipulation, his character Druig often has ideological conflicts with the other Eternals regarding their inaction towards human affairs.