Home Entertainment “9-1-1”: Oliver Stark and the cast reveal the secrets of Season 6... 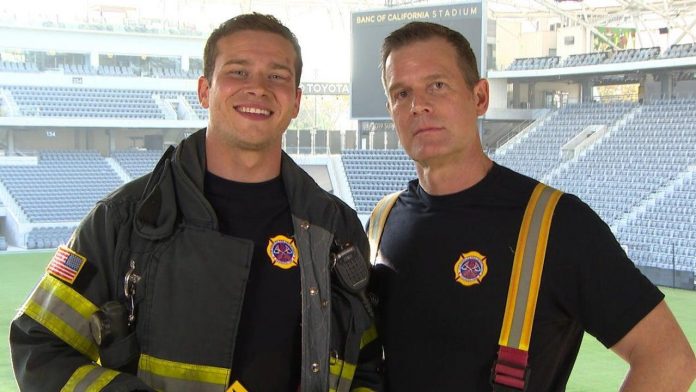 The cast of 9-1-1 is preparing for a blimp disaster when season 6 begins on Monday. Only ET was on the set of the action-packed season opener with series star Oliver Stark, who plays fireman Buck, taking over ET’s microphone as a guest correspondent for the day.

In the season premiere titled “Let the Games Begin,” 118 are called into battle when the airship crashes and its engine catches fire. Athena (Angela Bassett) and the team must rescue victims both inside and outside a crowded sports stadium. Meanwhile, Bobby (Peter Krause) and Athena drop May (Corrine Massiah) off on her first day of college and discuss honeymoon plans, while Maddie (Jennifer Love Hewitt) and Chimney (Kenneth Choi) go to therapy for the couple.

“When we do our premieres, we always like to be really large-scale,” Stark adds, as the camera shows an impressive scene with a huge airship in the background. “And this year we are going to make a big airship. In typical 9-1-1 fashion, chaos will ensue.”

Bassett hints that the series opens the final season in an “exciting way.” The actress and executive producer expressed their surprise at how many grandiose ideas the 9-1-1 script service comes up with. “I wonder how many of them they can come up with,” praises Bassett.

When Stark asked co-star Ryan Guzman if he was used to the grueling physical exertion of being a firefighter during the season, Guzman was diplomatic about the expectations he now places on himself. “I think we all understood what is expected of us in this job. You know, you’re working out,” he teased Stark as they both flexed their muscles. “We’re getting a little bigger.”

But which of the actors would they most trust to rescue in a real emergency? —Aisha Hinds,— Guzman replied quickly. His reasoning, why? Well, it’s pretty practical. “She’s always on her phone, so she’ll call 9-1-1.”