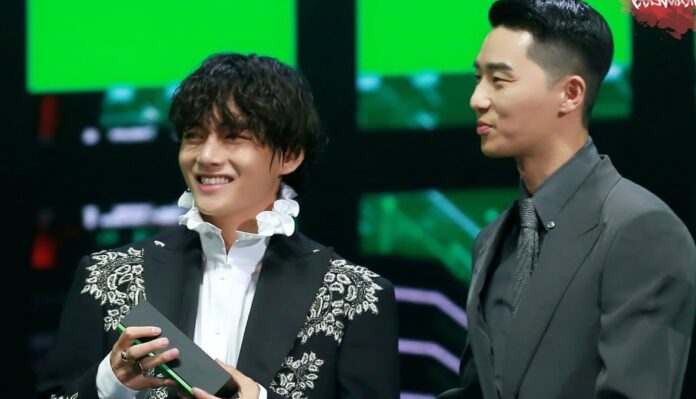 The friendship between Park Seo Joon and BTS’s V is endearing, check out their cutest and funniest interactions.

Park Seo Joon and BTS’s Taehyung share a very strong friendship , these are some moments when the singer and the actor stole the hearts of the fans for their great companionship .

The ‘ Wooga Squad ‘ is a group of actors and K-pop figures who met on the set of the drama ‘ Hwarang: The Beginning’ , V and Park Seo Joon are part of the group and have become great friends.

V is very charismatic and Park Seo Joon’s personality is shy, but very kind and cheerful, the two complement each other and that is why they are so close, despite their busy schedules they keep a space to live together and enjoy their friendship .

At various times Seo Joon and Taehyung shared with their fans their meetings, they go to dinner at a restaurant or show support in all their activities, when they meet at awards, their reactions are adorable.

This time we bring you some moments in which BTS’s V and actor Park Seo Joon showed the good friendly chemistry they have. Tell us! What moment between these two friends is your favorite?

During the most recent comeback of BTS , Park Seo Joon published in their stories and their feed of Instagram photos and video supporting the return of the band, the actor expressed his friendship and pride Taehyung .

During the 2019 annual MMA awards , V and Park Seo Joon met on stage, the actor watched as Taehyung approached with some hilarious dance moves, and couldn’t help but laugh a bit.

Park Seo Joon Hyung Sik and were seen by ARMY one of the concerts of BTS , the boys around the time encouraged the band K-pop and were amazed at the stage presence of his friend V.

Park Hyung Sik revealed that once he and Park Seo Joon went to visit V at his house, Hyung Sik commented that the three friends slept in the same bed and very comfortably rested to return to their activities the next day with a lot of energy.

Taehyung and Park Seo Joon celebrated the awards that the movie ‘ Parasite ‘ won during the Oscars , Choi Woo Shik , a friend of both, was part of the successful film . V and Seo Joon posted videos and images from the ceremony on their social media.

BTS’s V performed ‘Sweet’Night’, song from the official OST of the drama ‘Itaewon Class’ starring Park Seo Joon, Taehyung expressed his happiness to be part of his friend’s project.

Not only do V and Seo Joon have a good friendship , their adorable pets also get together every now and then to do some mischief and hang out. Owww look at how cute Yeontan , V’s puppy, and Park Seo Joon’s pet Simba look together .

Since V and Park Seo Joon began their friendship, the actor constantly posts images of BTS’s work for his followers to follow the activities and promotions of the Big Hit Entertainment band. Like the comeback with ‘Map of the Soul: 7’.