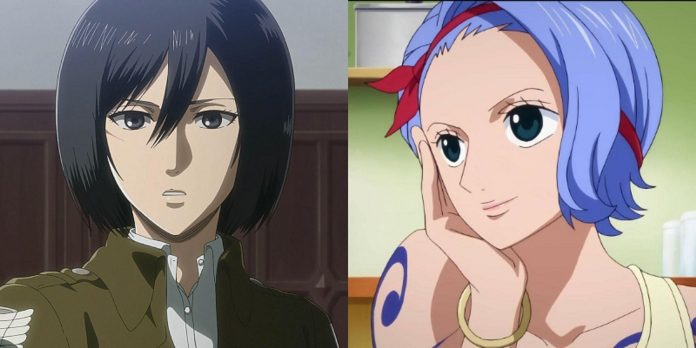 When it comes to a typical anime family, the first member to always stand out is usually the main character’s mother or matriarch of a family. As a result, other family members like anime sisters receive less attention, and thus can sometimes seem to fade from the minds of viewers.

Despite this lack of attention, however, there is still no shortage of anime sisters that are well-known among fans for their personalities. Moreover, biological sisters may be more at the forefront, but as of late, adoptive anime sisters have been getting more love. These anime stepsisters show that sometimes love can transcend bloodline.

After being saved from a group of human traffickers, Mikasa was adopted into the Yeager family, whom she loved as much as her birth parents. She especially developed a close relationship with Eren, often helping him out of tough situations when he was a child.

Much like Eren, Mikasa chose to join the Survey Corps after the attack on Wall Maria and the death of their mother. In her own right, she is currently one of the strongest members of the Survey Corps, but she still prioritizes Eren’s safety and well-being above all else.

Having been abandoned on the outskirts of Rukongai, Rukia was eventually taken in by the Kuchiki family, becoming Byakuya’s younger stepsister in the process. Throughout the entire Bleach series, it is very clear that the two of them are very protective of one another, coming to each other’s aid whenever the situation calls for it.

Even when Byakuya coldly refused to acknowledge her at the time of her execution, Rukia still took solace in the fact that she was able to meet and see him one last time. Later on in the series, Byakuya reciprocates her love, even going as far as to call Rukia his pride.

The heroine of Brothers Conflict, Ema Hinata lost her parents to separate accidents, resulting in her subsequent adoption by Rintarou Hinata. Upon Rintarou’s second marriage, Ema moves in to live with her new parents, where she meets her thirteen new stepbrothers.

Ema treasures her stepbrothers greatly, but is oblivious to the fact that the boys have developed romantic feelings for her, causing them to feud amongst themselves. Upon realizing this fact, she blames herself for being the source of their conflict and destroying their peaceful family life, sending her into a deep depression.

Like Nami, Nojiko was raised by the former marine Belle-mere in Cocoyashi Village after she found the two of them in the midst of a battlefield. Unlike Nami, however, Nojiko was aware of her status as an adoptive child. Nonetheless, she still loved Belle-mere and was devastated when she was murdered.

RELATED: Why Arlong Is the Best Villain in Early One Piece

When the Arlong Pirates occupied Cocoyashi Village, Nojiko served as the voice of reason for the village, trying to stop any villagers from being reckless or throwing their lives away. Even after Arlong’s defeat, Nojiko still cares about Nami’s well-being and is content with the fact that Nami is happy with the Straw Hat Pirates.

Acting as Oboro’s bodyguard, Akeginu also cares for her as she would a younger sister. When it came time for Oboro to meet Gennosuke as per their arranged marriage, it was Akeginu who helped her get ready and cured her hiccups when she got nervous.

Out of all the Iga ninjas, Akeginu is one of two people who are more lenient with Oboro’s lack of combat skill, the other being Koshiro. Even when Oboro decided to seal her eyes shut, an act that very nearly constituted betrayal, Akeginu still supported her to the best of her ability.

The mysterious Aika Fuwa had a rather detached personality towards the people around her. Wise beyond her years, Aika’s overwhelming presence, coupled with her status as the Magician of Exodus, makes those in her vicinity rather uncomfortable.

RELATED: Magical Girls That Have Been Through Hell

Despite these traits, however, Aika proves to have a softer side, having cared greatly for her stepbrother Mahiro and boyfriend Yoshino. Before her death, she wanted the two of them to carve out their own futures. It is her supposed murder that inspires both Mahiro and Yoshino to search for her killer.

Sagiri also had a loving relationship with her mother; it was her mother who taught her how to draw, and her death ultimately drove Sagiri into reclusiveness. It is only when she is streaming live, using the pen name Eromanga Sensei, that Sagiri is at her most extroverted.

Compared to her stepbrother Sora, Shiro is far more level-headed, rarely showing any emotions and possessing an analytical mindset. She still finds herself very dependent on Sora, to the point that she will become immobile when she is separated from him for a long period of time.

In the midst of a game, Shiro is ruthless, not hesitating to show off her skill at any given chance. Despite her childlike appearance, Shiro has no qualms about making others perform degrading tasks for her, a trait that shocks even her stepbrother.

At the service of the community: Nioh is free and we...

Hawaii Five-0: This is how the program that ended in its...