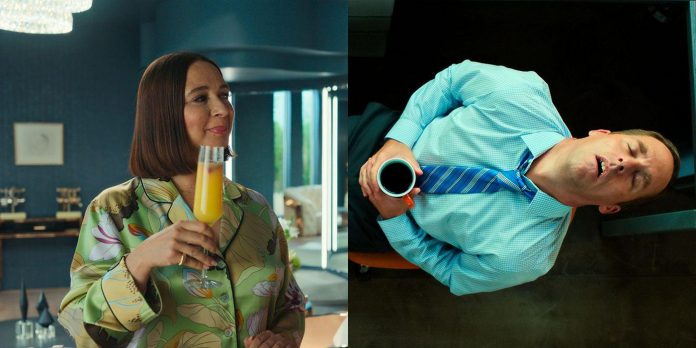 With a good chance of the show being renewed for a second season, there are likely many more hilarious witticisms and gags to come for the Apple TV+ original series Loot. Many of the funniest scenes come from the lead character, the newly single billionaire Molly, played hilariously by Maya Rudolph who delivers each quote to perfection. But the supporting characters also have some great lines, too.

The best quotes on the show are mostly funny but there are also moments that are somewhat prophetic, too. Hopefully there will be more to come, but for now, it’s fun to look back at some of the best from season 1.

“On a scale of aging Jennifers, you went from Aniston to Lopez.” (Howard)

Howard always has great one-liners, and this was one of the first he spoke on the show. He said these words to Molly when she walked into the office, referencing the fact that he has known her all her life. She completely forgot that he was her cousin and she got him the job there. Nonetheless, she loved the warm greeting.

Of course, the sentiment was meant to be a compliment in every sense seeing as both Jennifer Aniston and Jennifer Lopez – two of the most famous celebrity Jennifers – are in their 50s and look incredible for their ages.

Won’t Happen To You

“You always hear about stuff like this happening, you never think it’s going to happen to you.” (Molly)

It was one of the most relatable quotes from the show: while drowning in her sorrows after discovering her husband was having an affair with a pretty, young employee, Molly said this line. So many people who are cheated on, like Molly, never believe it would have ever happened to them.

It’s common to hear stories that always seem to be so far away from personal life until it actually happens to someone directly. This was one of Molly’s most relatable moments, proving that having money doesn’t solve all problems. It was scenes like this as well that could rank Loot among Maya Rudolph’s best roles.

“I gave ten thousand dollars to Green Peace. That should even it out, right?” (Molly)

Molly always meant well, but she wasn’t always aware of how the rest of the world beyond the one-percenters live. When she showed up with a fleet of energy-hogging vehicles to transport Sofia and the rest of the team to a new shelter for an opening ceremony, Sofia nicely explained to her that the optics of such a move would not look good.

RELATED: 10 Best Documentaries On Apple TV+, According To IMDb

Instead of realizing what Sofia meant and the error she made, Molly nonchalantly pulled out her phone, tapped a few buttons, and said this, as if that would make it all okay. She had a lot of learning to do.

“You have this hole inside of you and you’re trying to fill it.” (Sofia)

Another keeping-it-real moment, even though she should have been intimidated by Molly, who owned the charity, Sofia – one of the best characters on Loot – didn’t mince words. She made it clear that she realized why Molly had taken a sudden interest in the charity.

She pegged exactly what Molly was up to, and despite Molly admitting that she was right and delivering a heart-wrenching speech about trying to find herself in the wake of her divorce, Sofia didn’t care. She was sympathetic, but Sofia was all about the work and ensuring the charity achieved its goals of helping others in need. Sofia was fine with Molly being around as long as it worked to the charity’s benefit.

“You can’t just pack us up and move us around like we’re luggage.” (Sofia)

When Molly took the entire team to her private plane to suggest an impromptu team-building trip to Miami, everyone was excited except Sofia. She expressed that they couldn’t just pick up and leave to go somewhere on a whim, noting they had things to do and even meetings set up that day.

As she described to Molly, Sofia couldn’t view people like luggage she could just pack up and bring with her. Molly didn’t have day-to-day responsibilities. She could go where she wanted when she wanted and never had obligations back home that she had to worry about because she had people who could take care of things for her. She didn’t understand that not everyone lived like that.

“Is there a movie version of this stuff that I can watch?” (Molly)

Once Molly decided she would be all-in with the charity and wanted to dedicate her time to helping, Sofia told her that she first needed to get up to speed on everything they do as well as what they have accomplished in the past and the charity’s plans for the future.

She delivered boxes full of binders and papers with information for Molly to read. Her first comment upon being overwhelmed by the sheer amount of reading material was to joke about whether or not there might be a “movie version” of the stuff so she could power through it more quickly.

After visiting Molly’s home for the first time, Sofia got a taste of the high life and she loved it. Among Molly’s most ridiculous extravagances on Loot, for example, is having famous chef David Chang cook for her. Sofia tested the extreme level of service when Molly offered her something to eat and said she could have anything she wanted. Sofia asked for a chicken pot pie and cherry slush drink and in no time, both were delivered.

The next time Sofia visited, she hinted that she was peckish again and asked for a special dish. She also hilariously asked this question, as though there might be a special smart voice assistant in the home to whom residents can simply ask for food and have it magically made and appear.

Perfectly capturing a generational difference, while Arthur’s teenage daughter Alex is excitedly snapping selfies of herself on Molly’s plane, he quietly asks if she would like him to take one for her. She completely ignores her dad and he turns to Molly and says this.

While Alex has two people right across from her who would happily take much nicer posed photos, for her generation, it’s all about the selfies with silly smiles, poses, and hand gestures. Arthur knows this but asks anyway, only realizing after that it might have been a very “dad” thing to ask.