Home Entertainment 7 tips for beginners for the cycle: Frontier 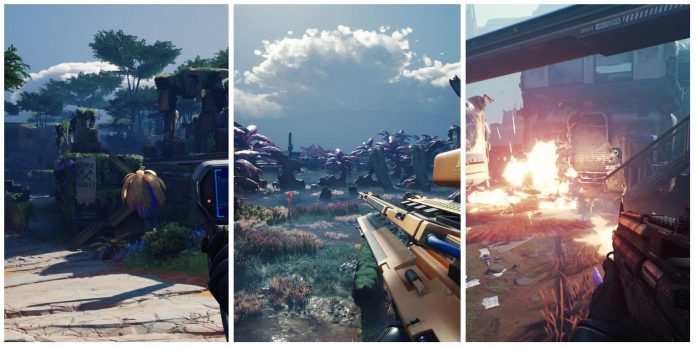 The Cycle: Frontier is a first—person shooter offering a unique combination of PvE (also known as “Player vs. Environment”) and PvP (Player vs. player), which gives an interesting experience that is not found in many other shooters. Many longtime FPS players have flocked to this game because of its unique take on the shooter genre.

Of course, there are several features that every player will have to get used to while exploring this game. Here are some tips for beginners that players should know before starting to play The Cycle: Frontier to ensure maximum efficiency.

In fact, when it comes to The Cycle: Frontier, there is fall damage. If a player falls from too high a height, they will end up taking damage; a certain height may even kill them.

As long as the player knows that the fall damage exists, he will be more careful. After all, no one wants to jump off a building to go down to the first floor just to kill themselves at the beginning of a round.

6 Plan ahead before you start the game

In Cycle: Frontier, there are many different quests and goals that the player can explore, just like in any good FPS game. Players must think through exactly what they are going to do before entering any area to complete a mission.

For example, if a player needs to collect a certain item, he will have to spend a lot of time in an area populated by an enemy from which this item falls. It will be good for the player to plan ahead based on what he wants to do — in a situation like this, it means that he has to be ready to fight against this particular type of enemy, possibly for a long time.

5 Get used to exploring the map

The maps in The Cycle: Frontier are, without a doubt, huge. It will be useful for the player to learn how to explore the map correctly, testing his endurance so that the bar always remains high, and not forgetting to prepare for storms.

Storms will cause lightning and strong winds, which can be very difficult for the player to cope with, as they can interfere with exploration. If the player knows what he is getting into, he will be able to complete his missions relatively easily, regardless of any storms he encounters or anything else that might get in his way. Practice overcoming storms and learn how to make sure they don’t slow down players.

4 Don’t quarrel with two people at the same time

The Cycle: Frontier is filled with many creatures that the player will want to kill as soon as he can. So there will be times when the player finds himself surrounded by several of these creatures, and it may seem tempting to kill them all as soon as they can.

However, this is a bad idea. The player will be surrounded by enemies and can eventually be quickly defeated. Instead, it would be nice to focus on one enemy at a time while dodging the attacks of others.

Daily tasks are, in fact, several quests that the player can take daily (since they are updated every day) and complete them for small items that can be useful in any FPS game. These goals for each quest are relatively simple, so it’s very easy to complete all of their daily quests.

The player needs almost no extra effort to complete their daily chores, and with the added bonus of extra experience and items. Small matters a lot, and rewards will accumulate over time as the player continues to complete his daily tasks.

2 Stock up on ammunition

It may seem obvious at first, but there are many people who will rush into the battlefield with a small amount of ammunition. As a result, they will be in the midst of a battle and will not be able to use their weapons.

The player is advised to stock up on as much ammunition as possible so that his weapon remains useful. While it may end up costing the player a bit of money, in the long run it will be more than justified to ensure that the player does not run out at the most inopportune moment.

Unlike many other games, The Cycle: Frontier has an insurance system, and it can really help save the player in the worst situations. If a player takes a particularly expensive item with him on a mission, it would be nice to insure this item.

If the player then dies, he will be able to get a good payout. I hope this amount is enough to buy another weapon similar to the one they insured.

The Cycle: Frontier is available for Microsoft Windows.