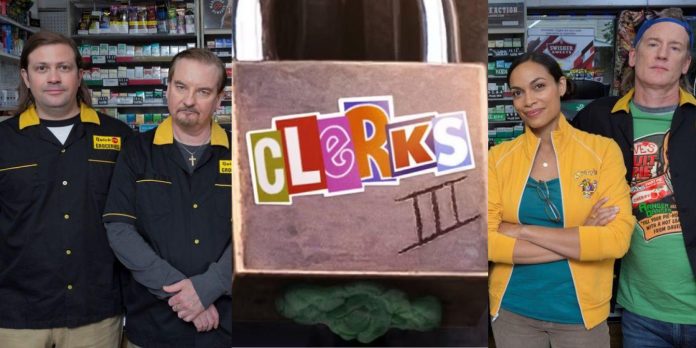 The trailer for Clerks III premiered on July 6th, 2022, to the cheers of View Askewniverse fans who have been waiting 16 years for this moment. With the theatrical release only two months away, it is time to rewatch the Clerks saga all over again and catch up on the characters fans know and love.

While the trailer only shows a smidgeon of what is to come, Kevin Smith has talked extensively about Clerks III in interviews, tours, and podcasts. He mentioned several things, including the history of the film getting made and the struggles he faced to make it. As the next two months unfold, fans hopefully will get more information before the release on September 13th.

At the conclusion of Clerks II in 2009, fans wondered if a third installment was in the books. While Smith did suggest it would be someday, he was not specific as to when. Jeff Anderson was already apprehensive to play Randal in the second film and flat out refused a third, until recently, when Smith convinced him to do so. He has never made his reasons for his hesitation public knowledge and Smith would not recast the role.

Casting issues aside, The Weinstein Company, which financed Clerks II, began to suffer major financial setbacks. By the time those were resolved, the sexual abuse allegations of Harvey Weinstein came to light before the disbandment of the entire company after his conviction and bankruptcy. Smith commented on the scandal on Twitter: “He financed the first 14 years of my career- and now I know while I was profiting, others were in terrible pain. It makes me feel ashamed.” It wasn’t until July 2021 that Lionsgate obtained the rights to Clerks III and Smith was able to start filming.

After the fiasco with the production company, the future of the View Askewniverse was up in the air due to a lack of funding, casting issues, Jason Mewes’ addiction issues, and Smith’s health problems. Clerks II was released in 2006, followed by Jay & Silent Bob’s Super Groovy Cartoon Movie! in 2013 and Jay and Silent Bob’s Reboot in 2019. Huge gaps between films caused fans to wonder if their favorite universe would come back. During these gaps, Smith had scraped the Clerks III several times and once said that the project indefinitely ceased.

To the surprise of everyone, Smith announced that Clerks III would indeed be happening, and following that would be Mall Rats II (now called Twilight of the Mallrats). Hopefully, fans will see more of the View Askewniverse in the future now that Smith has severed ties with his former financial backer. Many fans, including those on Reddit, feel that Clerks deserves more hype in 2022.

The premise of Clerks III surrounds Randal having a heart attack, and because he believes he is living on borrowed time, now is the best time to make a movie about his life with his best friend Dante at the Quick Stop. The two come up with the idea and decide to include everyone, including Jay and Silent Bob, who are, as Randal says, “like R2-D2 and C3P0, they’ve been here since the first movie, which was the last time they were cool, but they’ve been with the franchise so long they still give them cameos and put them on the lunchboxes.”

This plotline was inspired by the real-life heart attack Kevin Smith suffered in 2018 after performing at a stand-up comedy show. He had a near-fatal total blockage of the left anterior descending artery. At that moment, Smith made many changes to his daily life, including becoming a vegan and losing a vast amount of weight in the process.

Dante Was Supposed To Be Here Today

Dante and Randal have been the owners of the Quick Stop since the end of Clerks II, a legendary sequel. As the business owners, the schedule is entirely up to them. Despite that, the phrase “I’m not supposed to be here today” and all the comments surrounding it have become a legendary funny quote in the View Askewniverse. From the limited view of the trailer fans got to see, Dante finally seems content in his life. This is a vast contrast to the first two Clerks films, in which he thought that his life wasn’t that great because he was still entry-level at his age.

After Randal has a heart attack and the duo decide to make a movie of their adventures together, they take all the necessary actions to put together their movie, including finding actors to play themselves. According to AV Club, Clerks III will explore the making of Clerks filmed by the guys in Clerks.

Dante & Becky Are Still Together

Fans saw Dante and Becky together at the end of Clerks II where she was very pregnant and they were opening the Quick Stop. That fling on the Mooby’s prep station counter seemed to work out in their favor, as they are now married.

In the trailer, they are seen on the couch of what is thought to be their home and Becky is supportive of what Dante is doing for his friend. Considering that Becky didn’t really approve of Randal in Clerks II because she felt he was disgusting and lazy, she now seems to understand that Dante and Randal are a package deal. With the dynamic of the three, Clerks III will be among the top movies of the View Askewniverse, along with its predecessors.

All The Main Cast Members Of Clerks II Are Returning

The characters fans all know and love, hate, and laugh at are coming back together. Once Jeff Anderson finally agreed to return as Randal Graves, all systems were a go to start the filming of Clerks III. No one else would be able to fill the big shoes of Anderson and Clerks is not complete without Randal Graves.

Related: 10 Most Interesting Things We Learned From The Kevin Smith Documentary

What would a View Askewniverse film be without Ben Affleck? He has become a regular in the universe, even if the role is minor. He is seen in the trailer saying Dante’s catchphrase, “I’m not supposed to be here today!” Matt Damon is unfortunately not listed in the cast, but that doesn’t mean he won’t be there.

Additionally, the cast list includes many other big names, such as Amy Sedaris, Austin Zajur, Fred Armisen, Sarah Michelle Gellar, Justin Long, Michelle Buteau, and Marc Bernardin (Producer of Star Trek: Picard) in undisclosed roles. With the variety of celebrities appearing in the film, it should make an interesting dynamic that fans will love.

E3 2021 event canceled due to pandemic