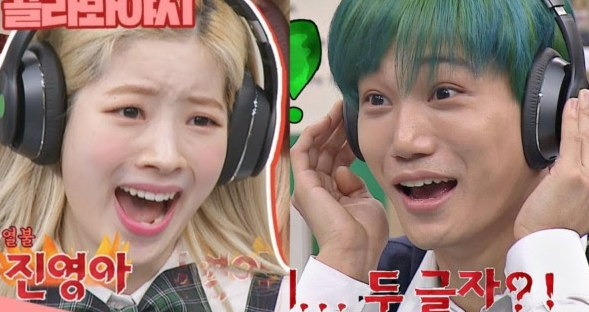 “Affogato?” Among the k-pop groups that took part in the whisper, these idols undoubtedly made fans laugh to tears with their hilarious responses and interactions!

If you are a fan of entertainment shows and at the same time K-pop idols, you should know that “Whisper Challenge”, also known as “Shout in Silence Game”, is one of the most popular games that guests usually play.

The mechanics of the game are simple: successful players must guess the words that Player 1 will say… in headphones.

This is a test for the clarity and accuracy of the mouth shape and pronunciation, but the most exciting and fun part of this game is coming up with completely different words that cause the audience to burst out laughing.

Here are 7+ K-pop Idols Whisper Challenge Clips that will Round out Your Day:

If the category is a whisper challenge, then EXO is the MVP! However, they were popular not because they were good, but because of how bad they are in this game!

Just look at these two and you’ll know everything. From “avocado” to “affogato”, the plot twist is a pleasure.

Who could forget about the iconic reaction of Kai from EXO when he said, “Two words inside panties”?

BTS can do anything — after all, they produced the band themselves. But it seems that a whisper challenge is their weakness.

In this contest, K-pop fans can even whisper that BTOB are part—time idols and full-time comedians, with how naturally they make the audience laugh!

Just look at how the actors of “Knowing Bros” burst out laughing when Peniel asked Songjae to pronounce the word “nail” in English, and the latter replied, “I do not know!”

Known as one of the most fun teams among the second generation groups, their individual reactions and characters during the whisper game will make you wonder how this group ended up with such chaotic members!

Dahen’s chemistry from TWICE with JYP, founded by their agency, will surely make you cry with laughter!

Just watch an idol girl swear and casually address her boss as “Jinyoung” after a disappointing but hilarious round of whispers.

Is it really required for the best male groups to be excellent at everything except whispering?

Despite the fact that SEVENTEEN is quite chaotic due to the large number of participants, in this clip everything becomes even more funny and messy!

iKON are cool and cool on stage, but they’re just a bunch of cuties and funny creatures, especially in this whisper game!

Mino is usually calm on stage, but you’d think he’s fighting for his life playing this “scream in silence” game!

What makes him more funny is that his best friend is Block B P.O fully corresponds to his energy! What a duet!

There are no words to describe the emotions while watching this clip, from beginning to end, the moment of “priki” by Lee Ynsan and Kim Usoka is simply hilarious!

Do you know any other fun k-pop challenges with whispers? Let us know in the comments!