Home Entertainment 7 Great Xbox Games You Can Play In 4K Thanks To Backward... 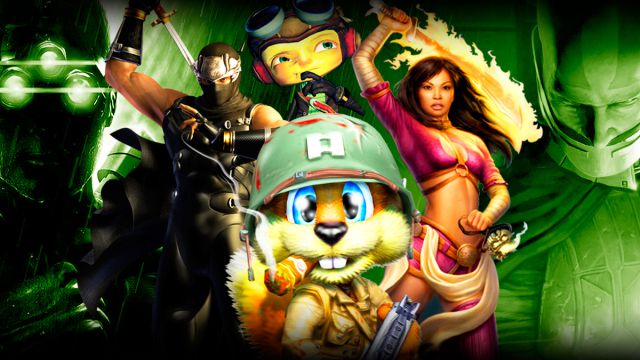 Xbox Games: The backward compatibility of Xbox One X and Xbox Series X allows us to achieve 4K resolution in titles that in their day did not even reach high definition. The 20th anniversary of Xbox is an event for the North American brand, which in two decades has sealed its name in the history of video games with four home consoles; each one with its particularities, but always with a recognizable ecosystem that is now reaching one of its best moments. Today we want to remember the first Xbox, the one that blows candles, while we take advantage of one of the most applauded functionalities of the last two high-end machines from Microsoft, Xbox One X and Xbox Series X, where we can enjoy backward compatibility with titles in up to 4K resolution and with up to 60 FPS.

In Xbox Series S and Xbox One we can also take advantage of this possibility, with a catalog of hundreds of backwards compatible titles from Xbox 360 and many others from the first Xbox, although without Ultra HD resolution. If the FPS Boost and Auto HDR were already steps in the right direction to improve the visual fidelity and performance of a hundred games, the improved backward compatibility of Xbox One X and, especially, Xbox Series X thanks to its SSD allow us to play to versions that look like remasters of their respective originals.

We recommend 7 games of the original Xbox that have left us pleasantly surprised and that we can enjoy in resolution up to 4K through backward compatibility.

Little can be said about what is for many one of the best Ninja Gaiden and one of the best action games in the history of video games. After its release in 2004, it was shocking to see these graphics on a console, but Xbox made it possible. And he did it based on fluidity, comfort in the mechanics and a curve of book difficulty; capable of subjecting the player to the limit. Ryu Hayabusha’s story reached its climax here, surely never improved from this point on. Before the soulslike trend, lovers of difficult experiences would fixate on the Team Ninja saga, with a plethora of Tomonobu Sakaguchi. Unforgettable, there is no doubt; but better in 4K resolution. It looks like another game.

Metal Gear, Deux Ex, Dishonored… but also Splinter Cell. The Ubisoft saga gained the popularity it has today not by chance, but by video games such as Chaos Theory, which on Xbox made us dream from the hand of Sam Fisher. It is evident that the proposal of the French company has little to do with the Konami saga, but this title made us understand why Splinter Cell had truly achieved excellence. An interesting plot, a fascinating use of gadgets and mechanics, coupled with a level design in which to progress was quite rewarding. It laid the foundations of what the saga would be in the future and, why not say so, many fans want future iterations of the license to resemble this brilliant Splinter Cell: Chaos Theory, which on Xbox Series X is enjoyed with loading times almost nonexistent.

This is not the only time we will name BioWare in this article. The studio responsible for Baldur’s Gate or Mass Effect has already made it clear with Star Wars that they perfectly understood how to handle the intellectual property of Star Wars with Knights of the Old Republic. And while the remake is on the way for PS5, believe us when we say that the Xbox backward compatible version in the new generation is a treat. When we talk about KOTOR we are talking about one of the most applauded works in the Star Wars universe in general; not just video games. An adventure title with RPG mechanics spiced up by an outstanding narrative. Making binding decisions for the development of the story, well-written characters and a plot that was constantly growing. Without a doubt, revisiting it is still highly recommended.

Conker: Live and Reloaded was conceived as a remake of Conker’s Bad Fur Day taking advantage of the power of the machine in that 2005 protagonist of the Xbox sector; added to a new multiplayer component. The result, while not as memorable as the original work, was a benchmark platform title for fans of the genre. Rare had to face herself, and while the controller had room for improvement, it’s nice to see how good it looks today through backward compatibility. What did not change was his sense of humor, the translation into Spanish, a soundtrack with unforgettable themes and a technical section that, why fool us, set the bar quite high in its day.

That Pshychonauts 2 is a candidate for everything in 2021 should not surprise anyone at this point, it is an excellent title. The original work went more unnoticed, so we take advantage of now that it is on Xbox Game Pass to highly recommend it to everyone. A singular platform title, with a Double Fine unleashed and brimming with ideas; all of them embodied in an excellent playability and a technical section that raised the bar in the genre. Peter McConnell put the icing on the cake with his sound compositions, but here the real protagonist was Raz, who with his skills successfully married into a rich and varied level development. A title with soul, care and tenacity, which made us fall in love with the message he wanted to send in a setting as macabre as it was elegant. Pure Double Finde.

One of the best installments of the saga. At a time when 1080º Snowboarding raised the bar on GameCube, Electronic Arts surprised us with the most spectacular EA Canada project we had seen in that generation. What we did not expect is that its play of light and shadow, with a lighting that really surprises, was going to make the title win both on Xbox One X and Xbox Series X, where we have recently played it in 4K. It is a delight, with an arcade control that little by little we have been losing; and unbridled, direct and effective fun. The hallmarks of the saga remain, with a soundtrack worthy of the best EA. A snowboard title that now, after so many years, has aged wonderfully.

If they tell you that an essential video game such as Action RPG Jade Empire in 4K resolution and at 60 FPS without any kind of performance drop, there is no doubt that the situation is attractive. Whether you have an Xbox One X or an Xbox Series X, the performance is unbeatable; looks like a free remastering by gaining quality of detail in shadows, lighting, and amount of detail in textures. More than fifteen years have passed, but BioWare’s work remains as the first day, with a system of morality, a development of dialogues and a brand of house combat system. In addition, its setting in the oriental fantasy of imperial China made a great impact in its day: pure affection for martial arts with the stamp of the company responsible for Baldur’s Gate and Neverwinter Knights.