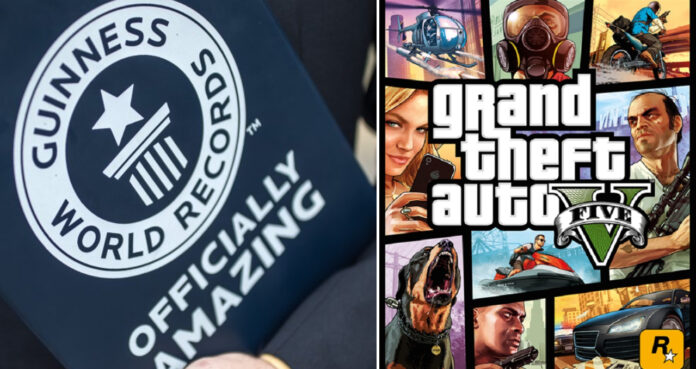 GTA 5 is among the games that made a name for itself with its Guinness record. The game, which draws attention in terms of high sales numbers, high income and high number of players, has 7 big records in total. Breaking so many records has made the game one of the favorite games since 2013. GTA 5 records were talked about as much as the game.

As it is known, Epic Games gave the game to players free of charge for 1 week. This free use has expired. There has been a huge increase in the number of players included in the game in the last 1 week. This made the game agenda again.

GTA 5 broke the Guinness record and met the players
GTA 5, which managed to be one of the most popular games in the game world, met with the players on September 17, 2013. The game, published for the computer, PlayStation and Xbox, holds 7 different records, which we will talk about in the article. RockStar Games, a game that holds the hard achievements a game can achieve, currently has a price tag of $ 169 on Steam and Epic Games.

Now, let’s pass the records that the game broke to you in chronological order. The game had achieved record breaking success in the first hours of its launch. The interest in the game showed itself within 24 hours.

1. 24-hour action – adventure bestselling game
We have already mentioned above that there are big sales figures in the first hours of the game. The game received great attention in the first 24 hours of its release. The game, which was sold both in online channels and in stores, achieved this value before it went on sale in Japan and Brazil. Even in the middle of the store, queues were formed in front of the store.

It is stated that the game achieved sales success of 11.21 million in 24 hours. The game had a $ 60 price tag on the first day it went on sale. However, this price varied according to the country and region of sale. The game is known to attract intense interest in many parts of the world.

2. Best selling game in 24 hours
This was another remarkable success in the GTA 5 Guinness record. The game, which has not lost its popularity for 7 years, holds the best-selling game record in 24 hours with more than 11 million values. The game, which is unrivaled in this record, has many factors in achieving this success. The first reason is that the Grand Theft Auto series has long been liked. Then the game’s graphics and improved open world show itself.

The night the game went on sale, 8,300 stores were open only in North America. The role of the stores that operate outside of normal working hours is quite big in reaching the high sales figure. Such high sales figures and interest were also reported by leading international press organizations. Such high interest is also experienced in the sale of consoles.

Reaching $ 815 million in 24 hours, the game earned $ 33.98 million per hour, according to the calculation. This shows the success of the game in terms of income. In addition, the game is not only successful in the game world. The next record is remarkable with its title.

4. Online production with the highest revenue within 24 hours
In the GTA 5 Guinness record post, the first day of the game’s success, the last is not just about the game world. The game entered the Guinness Book of Records, thanks to its success as an online production. The record has a value of $ 815 million, which we have just mentioned, with the title “Online production that provides the highest revenue in 24 hours”. Game, video, music, social media etc. Success in online media, which includes topics, also reveals the power of the game world.

The gaming industry has recently begun to experience its most brilliant periods. In this period, when we can compare the lights of player computers and equipment, many kinds of products have been offered to the players. Games, computers, keyboards – mice, headsets, monitors etc.

In fact, it was a great success that the games in the GTA series met the players. The previous game in the series, GTA IV, also managed to generate considerable sales and revenue.

7. Last GTA 5 Guinness record: Best-selling action-adventure game
Looking at the records in our GTA 5 Guinness record article, it is seen that the records are usually the first days of sale. However, the record, which we will talk about now, was recently broken on February 6, 2020. According to the record, GTA 5 has become the best-selling action-adventure game with 120 million sales successes. The game has achieved 120 million sales in February 2020 since 2013.

Computer, PlayStation 3, PlayStation 4, Xbox One and Xbox 360 sales were calculated for this sale. It was also stated that the game was still playing while recording the record. The share of the online mod part is quite big in this popularity of the game.