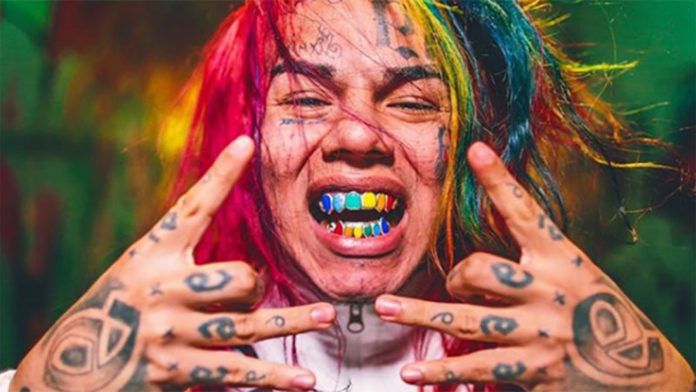 Rapper 6ix9ine is back and he wasted no time in making a buzz. The proof: he trolled the mayor of Los Angeles!

6ix9ine has come a long way ! Not so long ago, the rapper was still behind bars.

Yes, the star received a prison sentence after multiple cases related to high-level banditry. But that’s not all.

The rapper did not hesitate to throw his former cronies to the judge to see his sentence reduced. Suffice to say that 6ix9ine has made quite a few enemies with its tongue hung.

In addition, he also lost all credibility in the rap world. Qualified as “balance” or the worst adjectives existing on Earth, the interpreter of “Tati” will have to row to redeem himself from his audience.

The latest news is that everything is fine for him. Being afraid of contracting covid-19 in prison, the interpreter of “Mala” was therefore able to find his home.

He will therefore finish his sentence at home. In addition, according to the words of his lawyers the rapper should soon return to the studios.

Indeed, the star would potash two opus. One should be in English and the other in Spanish!

6IX9INE HAS FUN TROLLING THE MAYOR OF LOS ANGELES AND IT’S HILARIOUS!

Even in the United States, containment is required to fight the Covid-19 pandemic. Unfortunately for the moment, patients continue to arrive en masse in hospitals.

To date, research has not yet found vaccines to counter the epidemic. Unfortunately some American citizens have not really understood the gravity of the situation.

The mayor of LA therefore asked its residents to denounce all those who do not respect the latest sanitary measures.

Teasing or sincere? In any case, 6ix9ine trolled the mayor of LA by offering him his… “balance” services.

On the Web, the rapper’s proposal was strongly criticized. While other Internet users have rather had fun.

Obviously 6ix9ine assumes and claims this sad image of “balance” which sticks to its skin. To be continued !

Dear U Bubble, the new way to communicate with your idols...

With Facebook’s New Tool, Photos and Videos Can Be Easily Transferred...