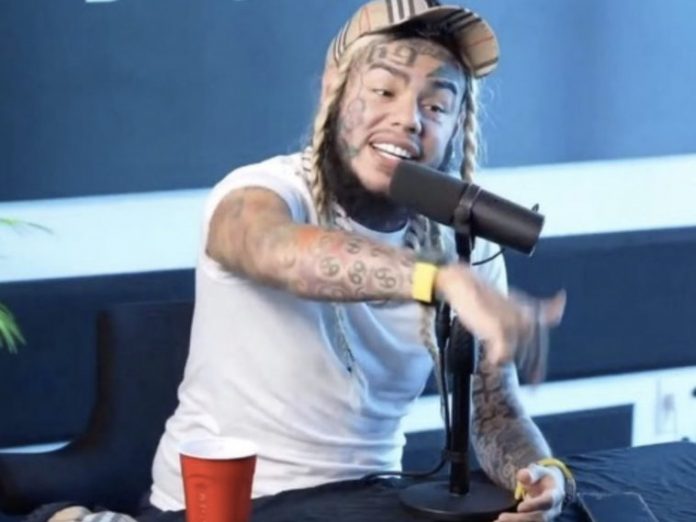 During the 1st episode of the new podcast of famous hip-hop insider DJ Akademiks, 6ix9ine once again claimed to want to do battle with Lil Durk, even inviting the latter’s manager to organize a fight.

DJ Akademiks, one of the most famous American insiders in the American rap world, is famous for his ability to multiply the impact of certain information and controversies. Recently, he also befriended the highly controversial New York rapper, 6ix9ine. A friend he decided to invite on the set of the 1st episode of his brand new show, Akademiks Podcast. Facing Tekashi, the journalist also decided to invite Wack 100, a well-known and respected figure behind the scenes of the US rap game. The latter, aged 43, is notably known for being the current manager of Blueface or of The Game., and also worked as an artistic director for many big figures of the American game. The 3 men thus led a heated conversation that lasted more than 3 hours during which Daniel Hernandez once again did not pray to do the show. He notably mentioned the Lil Durk case by asking Walk 100, manager of the rapper from Chicago, to call him during the show in order to do battle as quickly as possible.

The rhetorical battle between 6ix9ine and Walk 100

During this sequence, we can indeed hear 6ix9ine say to Walk 100: “Before you leave Miami, you call Durk and you make sure you put him in the same hotel room as me, make sure that is coming […] You have your phone right there ”. The thing to which Walk replied: “ And what? I can make that phone call very well. Do you wanna hit a head with Lil Durk ? Look me in the eyes”. Faced with this response, the interpreter of Gooba replied: “A head-to-head with Durk . The bathroom is right here ”. He continues: “In 2015, when I was on Riker Island (a large prison in New York ), and I was in one of the three buildings in Block A, I was in the bathroom with guys from YG . Are you fucking delusional ? ”. An anecdote that did not impress Wack at all, who even took the opportunity to try to bring Tekashi back down to earth: “ Were you in this bathroom to take drugs, or maybe you were there also on purpose? As loud as you want to speak, know that you are not as fat as you think ”. As a reminder, for many months 6ix9ine has been having fun biting Durkio quite badly, as was the case during the death of his little brother, or the burglary of which the Chicago rapper had been the victim.