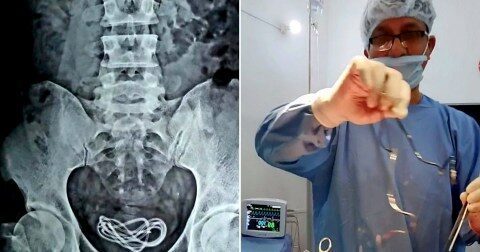 A 61-centimeter-long charging cable was removed from the bladder of a man who applied to the hospital with complaints of abdominal pain in India. The man apparently did not honestly describe his problem.

Until today, we have shared many incredible medical stories with you, but this time the story we will share remains even stranger than our other stories. On Sunday, in the north of India, doctors carried out an interesting and upsetting operation.

She applied with abdominal pain, cable came out of her bladder:

The doctors, who examined the X-ray results of the man X-rayed by the doctors, encountered something very surprising. A 61-centimeter-long cable appeared inside the man who applied to the hospital with the complaint of abdominal pain. Doctors immediately treated the patient.

The gastrointestinal tract of the man, walking through a 61-centimeter cord in his bladder, would be examined by doctors. However, the patient used constipation medicine for exactly two days prior to this. Doctors who examined the patient’s gastrointestinal tract could not find anything here. Because the cable was in the man’s bladder. In other words, he had somehow entered through his genitals. The doctors, who saw this, immediately decided to operate.

After the 45-minute surgery, a 61-centimeter cord was successfully removed from the patient’s bladder. It was seen that the cable coming out of the bladder was a charging cable. Of course, the doctor who operated on the patient said that he had never encountered such a thing during his 25-year career.

However, this was not the only strange aspect of the man who complained to the hospital with the problem of abdominal pain. Allegedly, the man had “accidentally” eaten headphones before. According to the doctors, the patient used this 61-centimeter cable for “sexual satisfaction”. As a result of all these events, the patient spent 3 days in the hospital after surgery.