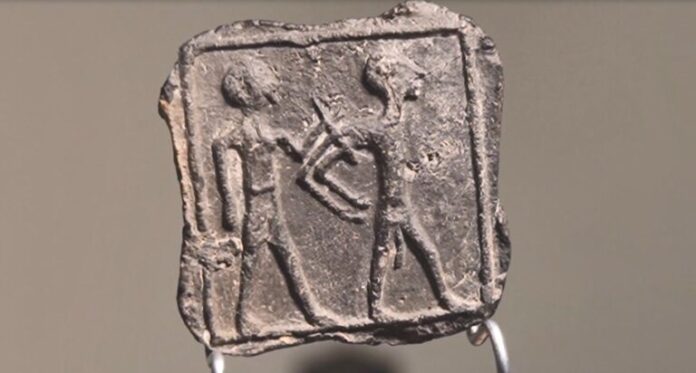 A clay art piece, which is thought to be at least 3,500 years old, was found by a 6-year-old Israeli boy recently. In this tablet, a captive circulating naked is depicted.

Imri Elya, 6, who visited the northern part of the Kibbutz Re’im archaeological excavation site in Tel Jemmeh region in March, came across a very small clay tablet with two human figures. Curious about what this little clay tablet is, Imri Elya’s parents decided to send this artwork to the Israel Antiquities Authority (IAA) and the National Treasures Department.

The family, who sent this photographed and documented work to the relevant institutions, received very surprising feedback. According to archaeologists who have studied the work, this little clay tablet was a very rare and valuable object that has been completely overlooked to date during the archaeological excavation in Israel. According to the Israeli Antiquities Authority, this clay tablet, which deals with the naked display of a captured prisoner, belongs to the late period of the Bronze Age, which dates from the 12th to the 15th century BC. Imri Elya made the biggest discovery of her life when she was 6 years old by finding a historical artifact of almost 3,500 years.

Here are 3,500 years old clay tablets:
The researchers, who studied the clay tablet, stated that the ancient Egyptian civilization ruled the lands of Israel, called Canaan (Canaan). It was also known that there was a civil war between the cities of Canaan in this region, since the letters sent to the ancient Egyptian emperors by the Canaanian rulers had already been discovered. According to this information, the figure on this clay tablet, according to archaeologists, is a picture of a moment from the victory marches after a city defeated another city in battle.

At that time, the city kings were exposed to the ’embarrassment march’ of their captives they had obtained after defeating the other city in battle to show their power to the people. It is also stated that thanks to this tablet, which has researchers from the Israeli Antiquities Authority, a new window has been opened to better understand the internal confusion and lifestyle of the period.

Saying that this finding is very important for archeology, Pablo Betzer of Israel Antiquities Authority states the importance of the discovery with the words “Historical artifacts are our cultural heritage and each invention is part of the puzzle that complements the story of the land we live in.”

A Molecule That Can Prove Life In A Meteorite Coming From...

Artificial Intelligence-Assisted Camera Developed to Identify People With Fever in the...