Home Entertainment 6 Android news that come even for old mobiles 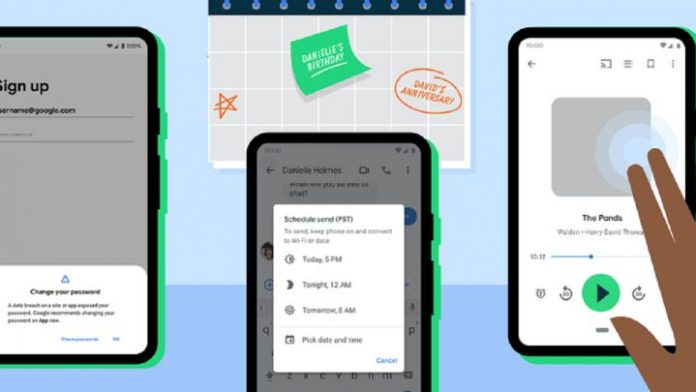 TalkBack, the function for the blind

People who are visually impaired or blind are also smartphone users. And it is that voice prompts and gestures are also readable input methods for a mobile phone and anyone who has it in hand. But in Mountain View they have introduced a novelty for Android called TalkBack that takes full advantage of the device.

It is true that this feature has been around for a long time, but now it is updated to version 9.1 with great improvements. For example, it will have new activatable voice commands, support for a braille keyboard that finally understands Spanish.

Sometimes you don’t want to send a message just by writing it, either because it’s not time to bother the other person or because you have to send it at a certain time. You may need to set an alarm for those times so you don’t forget to send those messages, but with the new Android feature you can schedule messages.

This will work in the Messages application, Google’s own messaging app, and as we told you, you can schedule messages. Just write the content, select the time and keep your mobile activated so that it is sent automatically

That the different software developers worry about your security is a great help. Sure you use many passwords to enter the different Internet sites, but this does not mean that they are infallible. That is why Google will put a new security system in its autocomplete function to compare the password with those that have already been violated within a list. In case the password is exposed, the app will help you change it.

See Also
The fastest processors have been announced on Android devices

At last! For many it seemed that the day was not going to come when Google Maps had night mode. This function was already available if you were an Android Auto user, since when the application detects that you turn on the low beams the system goes into night mode. Now it comes to your mobile phone, so you can use the app in this style whenever you want.

Another novelty that comes to Old Android phones has to do with Android Auto. The function to connect your mobile to the car will soon display its shortcuts, but there are still things to come. The clearest example is the use of entertainment applications, where you will ask Google Assistant for the games it has. Just tell him you want to play and he’ll tell you which ones are available, but keep your eyes on the road.

Use the mobile without pressing the screen

Thanks to the arrival of virtual assistants, everything is much easier and now you can get more out of Google Assistant. those of Mountain View provide a novelty to use the mobile even if you do not have it nearby and it is blocked. The best thing is that you can ask him almost anything, from composing a message, to playing music to setting alarms with a full command.

EA Play comes to PC with over 60 games

McDonald’s opens restaurant inside The Sims 4