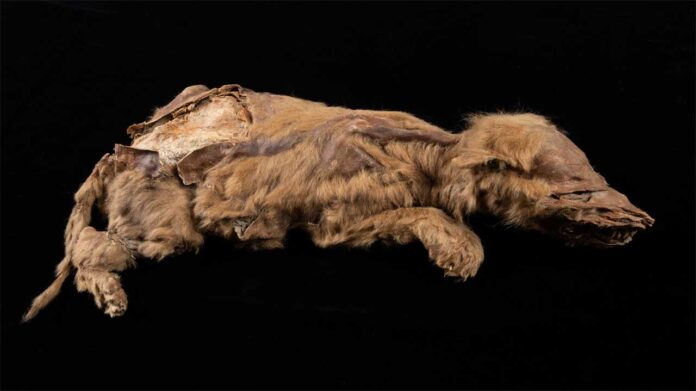 A 57,000-year-old baby wolf fossil, identified as living in the ice age, was found in the Canadian state of Yukon. Scientists have completed their studies on this fossil, which even managed to preserve its feathers.

In 2016, a 57,000-year-old baby wolf fossil was found in Canada’s Yukon state. This fossil, which the miners found in the area where they work, has been under investigation by scientists for a long time. The work done ended and the article on the fossil was published in a scientific journal.

The researchers state that this fossil has the most durable mummy they have ever seen, and that even the fur and internal organs of the baby wolf are intact. It was determined that the wolf, which does not show much resemblance to the current wolves, lived in the ice age.

The baby wolf was only 7 weeks old when he died

The body of the 57,000-year-old wolf was so well preserved that researchers could even detect the last food the wolf ate. Scientists said that while they were waiting for a deer or bison to be the last thing the wolf ate, they found fossils of fish in its stomach.

As a result of the tests and analysis, the researchers, who found that the baby wolf was only 7 weeks old when it died, could not determine the cause of death. The pantheologist Grant Zazula, who worked on the research team, stated that the fossil was similar to the wolf species living in Europe during the ice age. He also stated that the baby wolf also revealed the population change experienced at the end of the ice age.

Coronavirus, Can Be Transmitted To Someone Else With Fart?