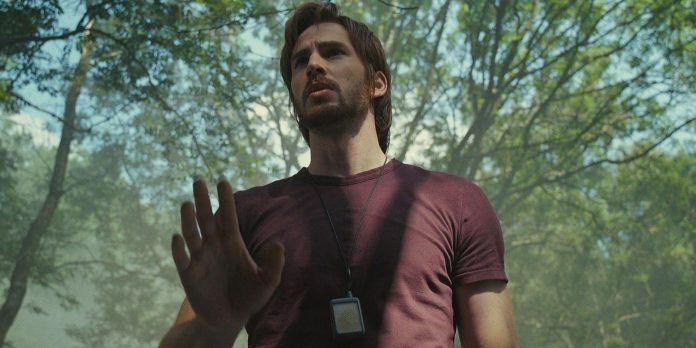 There’s an unfortunate Faustian quality to signing on as a big player in a blockbuster mega-franchise that turns the role of a lifetime into a hurdle to overcome. When the entire world knows a performer as the face of an iconic character, it becomes even more important to appreciate the other interesting roles they’ve taken on.

Chris Evans has been acting since the late 90s, but comic books have been a central aspect of his career for the overwhelming majority. He garnered attention for his stellar portrayal of Johnny Storm in Fantastic Four before settling into the iconic role that defined much of his career. Evans has proven himself in comedy, action, drama, and much more over countless great roles.

Jake Wyler – Not Another Teen Movie

Chris Evans’ feature film debut came in 2001 when the actor was only 20 years old. He was the standout leading man of a massive ensemble cast in Joe Gallen’s comically tasteless parody of high school coming-of-age dramas. Not Another Teen Movie wears its parody credit on its sleeve, literally calling its archetypal high school John Hughes High. Evans stars as the classic star athlete himbo who takes a dare from a friend to transform an unpopular classmate into the prom queen. Evans is hilarious in the role, effortlessly pulling off spoof standbys as both the “idiot hero” and the “last sane man” at different moments. Not Another Teen Movie was panned mercilessly upon release, and some of its humor remains gleefully immature in a way that borders on lazy shock humor, but there’s some genuine insight into the genre scattered throughout. The jokes might land better on those who are still in high school, but Evans’ performance works for everyone.

Danny Boyle’s 2007 sci-fi thriller about a group of astronauts attempting to relight the burned-out sun was not a box office success, but it is a fascinating piece of sci-fi filmmaking. Written by Alex Garland of Ex Machina fame, Sunshine isn’t the most original film, but it is a stellar collection of elements. Chris Evans portrays the crew’s engineer James Mace, a pragmatic professional who gives everything he has to the impossible mission. The cast is solid across the board. Cillian Murphy is great in the leading role, Hiroyuki Sanada is powerful as the ship’s captain, and Mark Strong is a haunting villain. Evans isn’t the emotional heart of the story, he’s often the driving force of the narrative and the one keeping things on track. Even among other excellent performers and out of the starring role, Evans shines.

With another ensemble cast, another comic book adaptation, and another captain, Evans’ career has a lot of strange patterns. The Losers was a DC Vertigo comic series that ran from 2003 to 2006 that was adapted into a film in 2010. The film follows a group of soldiers of fortune who are betrayed by their handler and forced to go underground. After years in the wind, a mysterious woman with a grudge offers a chance to seek vengeance, setting off a generic PG-13 action plot that falls into all the typical tropes. While there isn’t much that’s special about the film, the one aspect most critics stopped to praise was Chris Evans’s performance. Evans portrays Jensen, the funny guy on the team. Not grim and growly macho one-liner funny, he’s actually a comic relief character. While just about every character in The Losers is a blatant archetype, Evans does a great job in a more comedic role. It’s nice to see a guy who’s used to playing unstoppable supermen take on a more awkward and comical figure.

This 2012 biopic tells the tale of Richard Kuklinski, a notorious hitman for the Mafia who may have a kill count in the triple digits. Among the many people Kuklinski probably killed was a mentor of his who taught him some of his techniques. Robert Pronge (his name was spelled Prongay in real life) was an ice cream truck driver who used his refrigerated vehicle to freeze his victims. He was portrayed by Chris Evans, but one could be forgiven for not recognizing him. Anyone who has longed to see Chris Evans play an unforgivable inhuman monster need look no further than The Iceman.

Fans who want the exact opposite of that, to see Evans portray a wholesome loving father figure, should check out 2017s Gifted. Mckenna Grace stars as Mary, an incredibly intelligent little girl who struggles to stay engaged with a public school curriculum that bores her. Her mother died tragically, leaving her the object of a custody battle between her uncle and her grandmother. Evans’ character Frank is a charming and warm presence who makes the most of his easy charisma. Sometimes the hardest role to play is that of a grounded real person. There are no special effects or choreographed action setpieces, there’s just a solid performance in an emotionally powerful film.

Every member of the Soldier Boy payback team and what happened...