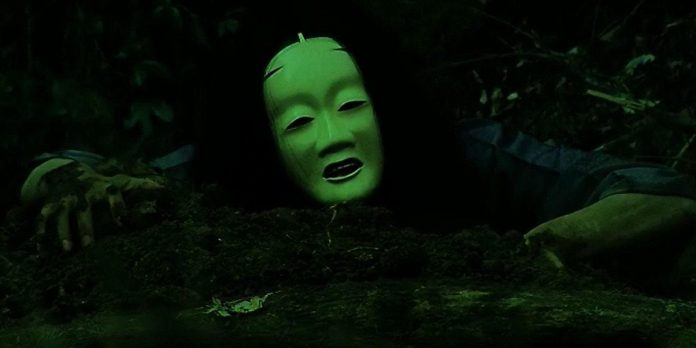 When it comes to Japanese horror movies, most people imagine a scary girl with long black hair covering her face, slow-crawling curses that eventually engulf the hapless protagonist, or runaway yokai. Haunted houses, families in danger and growing fears — that’s what this genre is famous for.

However, there is much more to Japanese horror cinema than pale ghost girls. There are incredible offers from Japan and in the slasher genre. Some retain supernatural elements, some are dark psychological thrillers, and others completely destroy the slasher genre.

The Lesson of Evil

It’s almost impossible to talk about Japanese horror movies without mentioning Takashi Miike. This 2012 slasher is an adaptation of the novel by Yusuke Kishi and tells the story of Seiji Hasumi, a schoolteacher who decides that rampant bullying and violence in his school must be curbed in any way possible. The truth about Hasumi is that he is a dangerous and intelligent sociopath who has been killing people for fun since childhood, including his parents.

The film turns into a tangled web of blackmail, murder and manipulation, as Hasumi sets students and teachers against each other. He hides his murders as suicides, sows the seeds of gossip and rumors and eventually comes to a full-scale massacre. Upon release, the film did not receive approval, so it did not receive much attention outside of Japan. However, it’s worth looking at the stylish visuals and performance of the lead.

In the 2010 slasher “Black Rat” directed by Kent Fukasaku, a group of students receives a mysterious message about a meeting in Class 3B at midnight. Six students gather and encounter a girl in a school uniform and a black rat mask. The figure does not speak and communicates only in writing.

Forty-nine days before that, Asuka, a student of the group’s class, committed suicide by jumping off the roof of the school in a black rat mask. All she wanted was to put on a cultural rat-themed dance for the school festival, and the group started bullying her, humiliating her and throwing her homemade mask in the trash. Now the teenagers are locked up in a school with a killer eager to avenge Asuka’s death. Since the students are being brutally murdered, the question remains: has Asuka’s spirit returned to take revenge?

“Sinister Dead-Trap” was released in 1988, and despite its name and frequent misunderstandings, the film is not related to Sam Raimi’s “Sinister Dead”. Instead, Evil Dead Trap is a bizarre slasher in which TV presenter Nami Tsuchiya innocently asks her audience to send home movies to her show. In return, she receives a snuff film about the brutal murder of a woman. The location of the film seems to be a nearby industrial area, and Nami and her TV crew are sent to investigate.

Of course, as soon as they start investigating, the team is brutally murdered one by one until Nami is left alone with the killer wandering around the building. In a twist of the story, the killer is Hideki’s deformed Siamese twin, whose twin brother seems completely unaware of his killer brother’s habits, despite them being attached to his hip. Fans of the unusual Basket Case of the 80s will like this strange and brutal offer.

The Guardian from the Underground

This 1992 slasher, also known as “The Guard from Hell,” is a story of obsession that slowly escalates into murder. Akiko starts her new job as an art buyer and almost immediately runs into Fujimaru, a corporate security guard. What Akiko and the rest of the company don’t know is that this mountain man is a former sumo wrestler who is under investigation for the second time for the murder of his lover and friend.

Fujimaru becomes obsessed with Akiko. He finds one of her earrings and wears it constantly, creates a temple for her in the basement of the building and watches her every move. Eventually, his obsession becomes all-consuming, forcing him to turn off the phones and electricity in the building. Akiko and the other employees must survive being trapped while a clumsy madman searches for Akiko.

Seven years after the school AV club was closed due to the disappearance of one participant and a serious mental disorder of another, Maki and Ai students decide to restart the club and make their horror film based on the events. Together with three other girls, they go to Yuai’s house. Once there, Maki and Ai show an 8 mm film in which someone in a mask kills his partner in the film with a meat cleaver.

The girls want to base their movie on this, but very quickly something goes wrong. The car won’t start, and their phones and all the food disappear along with the mask But also the cleaver, which were supposed to become props in their project.

The screenwriter of “Guardians of the Galaxy” is working on a...