Home Tech 5 Technologies You Probably Didn’t Know About Are Moving From Formula 1... 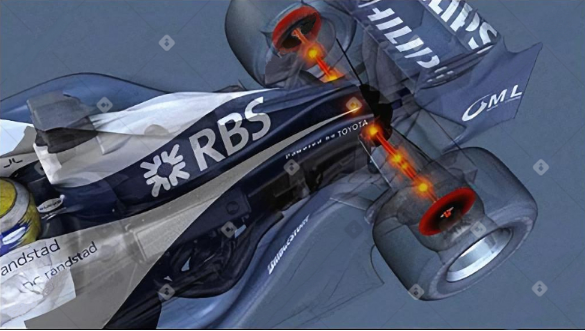 As most of us, especially motorists, know, Formula 1 cars are the most advanced and fastest asphalt cars on earth. They have so many technologies and features that make these tools so functional. Those that we can call the most useful of these functions are even reduced to some street vehicles, and today they drive in traffic jams.
First, let’s talk a little bit about how Formula 1 cars have become so advanced. Since most sectors have areas with advanced technology, Formula 1 is the area where research and development is most intensive in the automotive industry. One of the main reasons for this is that Formula 1 is one of the oldest and well-established motorsports, and also has astronomical budgets and revenues. This gives many competing teams the opportunity to try out new untested technologies and experiments on their cars and see the effectiveness of technologies.

Well, these incredible technologies are being tested and developed, but it’s nice; What will these technologies do in our daily lives? After all, you might think that all these are improvements to speed up and strengthen vehicles. We will talk about why each technology is used separately, a little later, but to summarize briefly, everything that accelerates and strengthens Formula 1 cars also increases their efficiency, stability on the road and ease of driving. Here are five Formula 1 Technologies You can See in Street Cars…

A magic carpet or a monster from the podium. Here is the “Adaptive Suspension and Traction Control System”.

The Williams FW14 Formula 1 car, which was originally released in 1991, unfortunately was not very successful due to some problems. That’s why Williams not only corrected these mistakes next season, but also added revolutionary features to them.

One of the two most important features of the FW14B (Spec-B), which began production in 1992, was the traction Control System (TCS — Traction Control System). Thanks to this system, the electronic module can reduce the loss of control that can occur due to excessive power generated by the engine by regulating the power and prevent the car from getting out of control.

The second of these features was the active suspension system, which was even more interesting. This system, in accordance with the pilot’s commands, changed the suspension stiffness depending on changing road conditions, ensuring optimal traction of the car with the road. All these technologies were so advanced that the FIA (International Automobile Federation) banned the use of these technologies to make racing more competitive.

Of course, the fact that these technologies are banned in Formula 1 is not an obstacle for automakers to apply these technologies on standard road vehicles. In fact, the clutch control system was very primitive in vehicles twenty years ago. But by making it efficient and convenient, the Williams team today allows even inexperienced drivers to better control their cars.

On the other hand, an active suspension system is a system that adapts to road conditions and is commonly used in luxury and sports cars. Thanks to this system, a luxury car can move like a magic carpet, but at any moment it can take on a very sporty character.

You don’t have to choose your side anymore. Here are the “hybrid cars”.

Of course, one of the technologies that makes modern Formula 1 cars so advanced is hybrid transmission systems. The system, which we call a “Hybrid”, is a type of power plant in which a gasoline or diesel internal combustion engine is supported by an electric motor or engines. Thanks to these systems, Formula 1 cars have reached an unprecedented level of thermal efficiency.

For the first time in 2014, a thermal efficiency of 50% was achieved. This means that half of the chemical energy contained in the burned gasoline has been converted into mechanical energy, and the other half into thermal energy. This may sound bad, but if you consider that the average car on the street reaches an efficiency of only 25-30%, then you can understand how advanced Formula 1 cars are.

In fact, this technology was used in Formula 1 cars long before that (2014). For example, the Toyota Prius (1997) was one of the oldest and most popular hybrid cars. However, hybrid systems before Formula 1 were inefficient, unreliable, in short, systems that people would not want to prefer. However, after Formula 1 developed more hybrid systems thanks to its huge research and development budget, passenger car manufacturers began to apply the technologies developed here to their cars, and today’s incredibly efficient hybrid cars were born.

Two birds with one stone. Here’s the KERS.

“So how does this system work in our everyday cars, what are the benefits in our cars?” If you ask; The first thing we should say is that it will contribute to operating costs. When you take your foot off the accelerator pedal in a hybrid or electric vehicle, a generator connected to the chassis kicks in and charges the batteries, converting the kinetic energy received by your car during acceleration into electrical energy. This works for you in two ways:

First; your car will necessarily slow down due to the “law of conservation of energy” in order to convert the kinetic energy it has into electrical energy. Thanks to this deceleration, the use of brake discs and pads will decrease in direct proportion in a very obvious way. At the same time, in some cars (especially electric ones), it is possible to adjust the magnitude of this effect and use a system called “One Pedal Drive”. This system acts as a kind of brake and slows down the vehicle until it almost stops, as the energy conversion works strongly as if you were braking, so you don’t need to use the brake pedal. Both your discs and a set of pads will last much longer, and the battery will be charged to a significant extent.

Secondly, thanks to this system, hybrid cars need not only an engine or wall adapters to charge batteries. So you increase fuel economy by taking less energy from the engine, but you also save a significant amount on energy bills as you will have more charge when you get home.

Gear shifts are faster than ever, transmissions are just as fragile. Here is the “F1 Gear”.

Many people who watch and do not watch Formula 1 have heard the term “F1 transmission”. As you understand, the “F1” in this type of transmission refers to Formula 1. So what is this F1 gearbox?

This transmission, which began to be developed in the 1979 Formula 1 season, for the first time gave Formula 1 drivers the opportunity to shift gears without taking their hands off the steering wheel. This gave the pilots incredible control and speed over the car. After a car with this equipment won its first race in 1989, this system became the standard of Formula 1, and its name is inscribed in the history books. The logic of the operation was actually quite simple, the sequential gearbox was controlled by a selector operating with a pneumatic or hydraulic system.

This system was faster and more sensitive than automatic transmissions with a torque converter of that period. This system was indispensable for sports cars, as the driver could manually shift gears at any time. The first company to use this system in passenger cars was Ferrari, one of the stars of Formula 1 at that time. The Ferrari F355 Berlinetta F1 was the first car with an F1 transmission that drove in traffic jams and was offered to users. Of course, this system wasn’t very successful when it was first introduced; This caused a lot of malfunctions, and their maintenance was very expensive. However, with the development of technology and increased reliability of transmissions, this system was highly appreciated by customers and turned into today’s automatic transmission with dual clutch.

We all know that most of the 2005 model cars that are used in road traffic today have remote control buttons on the steering wheels. Thanks to these buttons, we can choose the speed control system, multimedia volume, radio channel or the song we are listening to. How did these multifunctional buttons appear in our cars?

In fact, these buttons on your car are also an artifact of Formula 1. This technology, which began to be used in Formula 1 cars in the late nineties, was developed so that the driver could perform some controls without taking his hands off the steering wheel. Thus, their dominance over the car will not decrease at any stage of the race, and they will be able to drive more efficiently. This advantage was recognized as beneficial not only for Formula 1 racers, but also for us, those who use it in road traffic, and it began to be used in the steering wheel of passenger cars. Now, thanks to this technology, car drivers can also perform critical operations without taking their hands off the steering wheel.

The five technologies that we have listed above and the like are being transferred over time from Formula 1 cars to passenger cars, which makes modern cars as efficient and useful as Formula 1 cars. Now you can feel like a Formula 1 racer by shifting gears or changing the music on the steering wheel.