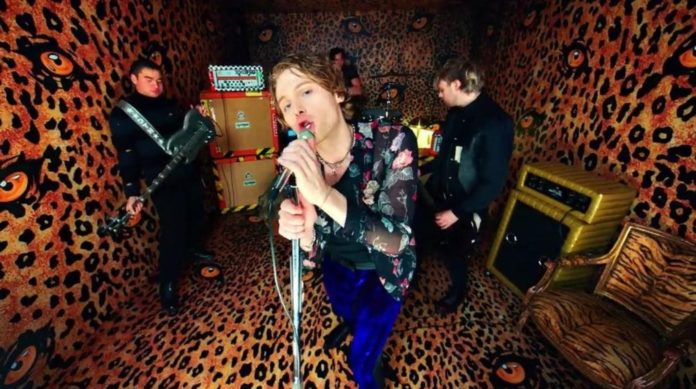 This is the first single from his album CALM that will be released soon.

The Australian band is back with a new music video that only anticipates what will be their next record, CALM . ‘No Shame’ is a song that refers to the way we appear in front of the cameras and in front of others for the satisfaction that comes from receiving attention , this is not only raised from their role as celebrities, because in reality It’s about something that happens with most people in front of social networks.

The story of the video revolves around a car accident where Luke dies , so we can see Calum, Ashton and Michael gathered after their loss. Surprisingly Luke appears at his own funeral, showing that he only took the opportunity to become the center of attention, or will it be to disappear and flee from it?

In addition, we see the boys playing the song in a small square set covered in leopard skin, with several eyes that blink as they perform ‘No Shame’. The phrase that starts the song ‘Angel, with a gun in your hand pointin’ my direction, givin ‘me affection’, could be interpreted as someone who has their attention on the other person, ready to ‘shoot’ a criticism or a accomplished depending on your actions. This space gives us the opportunity to appreciate the look that 5SOS will be using for this era . We have seen them evolve both musically and in the look they show as part of their shows, and this certainly demonstrates a transformation since the Youngblood era.

Throughout the music clip scenarios are taken that refer to previous music videos, such as ‘She Looks So Perfect’, ‘Hey Everybody’ and ‘Youngblood’.

Luke’s vocal abilities have been demonstrated once again, as the high notes are a constant throughout ‘No Shame’ , the rhythm section of the band in charge of Calum and Ashton have undoubtedly managed to stand out from the previous album of the band, experimenting with new styles and showing their great potential. We can’t leave behind Michael on the guitar, whose melody is probably one of the main causes of how easy it is to get hooked on the song.

The choir of the song reflects the addiction to the attention generated by certain media, and within the different scenes we see them representing each of the verses . Michael does not stop at the importance of a car accident and prefers to take pictures of it to post them later (I only light up when cameras are flashin ‘) , Calum seems to have it all, a family, a house and great luxuries, but still spending to have more (never enough and no satisfaction) . Luke fakes his death (digging my grave to get a reaction) and, finally, Ashton is a doctor who works on plastic surgery to achieve the stereotypes that people admire (changing my face and calling it fashion).

It’s a fun video, but with an important message. The 5SOSFam is very much enjoying the beginning of a new era of the group and we cannot wait for more for the launch of CALM and its visit to our country in the month of August. You saw the video? Tell us what you think.