Home Entertainment 5 New Game Surprises From The Developers Of Cyberpunk 2077! 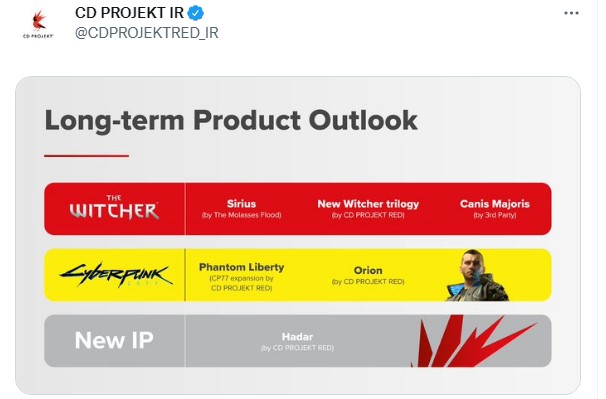 Interest in the gaming world is maintained thanks to new products released in recent years. CD Projekt Red, a developer of popular games such as The Witcher and Cyberpunk 2077, has announced that it is working on five new game projects. Here are the details.

CD Projekt Red, one of the well-known companies in the gaming world, shared details about its 5 new games with players through their social media accounts.

According to CD Projekt Red’s official Twitter account, Sirius, New Witcher Trilogy and Canis Majoris are being developed for The Witcher, and Orion is being developed for Cyberpunk 2077. In addition to them, a little-known separate game Hadar was also announced.

Polaris, the first game in the new trilogy, is developed on the Unreal Engine 5 game engine. The game, which is still in preparation, was announced by developers in recent months.

Sirius, which will open a new perspective in the Witcher universe, is developed by the independent game studio Molasses Flood and will have a multiplayer mode without a plot.

The Witcher: The Big Dog

Canis Majoris, which is considered independent, is the last game of the trilogy. Developed on the Unreal Engine 5 game engine, the product will be developed by an experienced CD Projekt Red games team.

Orion will be a continuation of Cyberpunk 2077, which has been criticized for shortcomings. The new game, which will be developed by an experienced team of the company, will move the series forward.

Hadar, a separate game from the Cyberpunk 2077 and The Witcher series, has been in development since early 2022. It is being developed by a small team. The company made the following statement about the game:

Project Hadar is a new series. For the first time in the history of CD Projekt Red is developing a completely new universe from scratch. Early conceptual work began in 2021. At the time of publication of this document, the work on creating the foundation of this world continues.

So, what do you guys think about the new CD Projekt Red The Witcher trilogy? What do you think the company will offer players in the new trilogy? Don’t forget to share your thoughts with us in the comments section!

How Chicago Fire can help Violet survive the consequences of an...