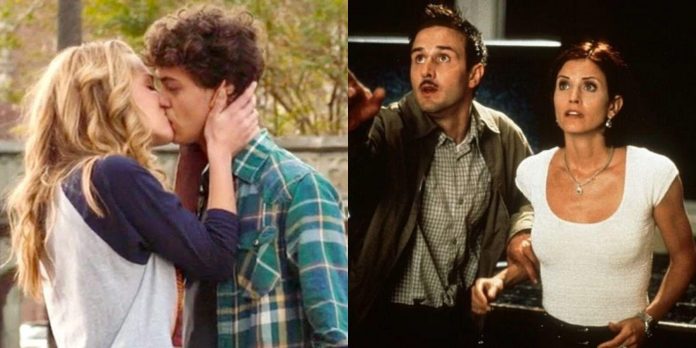 The search for love may not be the first thing the main character of a horror movie thinks about, as he fights villains or solves a supernatural mystery. But even though horror movies focus on, well, fears, there are a few movies with interesting relationships.

Regardless of whether the main character has fallen in love at the wrong time (and he has to face a killer before he can confide in this person), or the film tells about a couple going through something difficult, many horror films have an exciting love story.

The Scream franchise may be about Sydney Prescott’s (Neve Campbell) latest girlfriend, but the films have a sweet love story starring Dewey Riley (David Arquette) and Gail Weathers (Courteney Cox). While Dewey and Gail Milo meet in the original 1996 film and like each other, they see each other again in “Scream 2”, in which their romance officially begins.

When Dewey is investigating a murder at Windsor College, Gail meets him and they start flirting and chatting, although both are nervous being around each other. The two survive Ghostface and start dating, get engaged in “Scream 3”, show that they have a sweet marriage in “Scream 4” and eventually get divorced before “Scream” (2022). However, in Scream 2, fans can see that the characters really love each other, as Gale respects Dewey’s work, and Dewey knows that Gale is actually good.

“I Know What You Did Last Summer” is a 90s horror movie that holds up, and it also has a sweet romance in it. Before Julie James (Jennifer Love Hewitt) and her group of friends accidentally killed someone by running them over on prom night (at least they think so), Julie and Ray (Freddie Prinze Jr.) were madly in love with each other. They enjoy the summer before real life begins, thinking that they will always be together.

Over the course of the film, Julie stops talking to Ray along with her best friend Helen Shivers (Sarah Michelle Gellar), but Ray never stops loving Julie, and she still cares about him. This love story is realistic as the characters lose touch when Julie goes to college and Ray works as a fisherman in their hometown. While most couples can’t handle the scary situation here, many couples struggle to date from a distance or when one of them changes as they get older.

We can consider “Strangers” the scariest movie of the 2000s. It also has an exciting love story that serves as a backdrop for the horror that is happening.

After attending the wedding, Kristen McKay (Liv Tyler) and James Hoyt (Scott Speedman) find out that their own relationship is over, and they are going to sleep in the cabin before dealing with the sad business of officially ending the relationship. Soon, a knock on the door opens uninvited masked guests who torment and torture the couple. The movie can be really awful to watch, as it doesn’t look like there is any hope that the couple will survive. But the story also focuses on how emotional it can be when two people love each other but know they can’t stay together. The Strangers remains uncertain as to what went wrong, which works well as it seems more akin.

Blumhouse’s hilarious horror comedy “Happy Death Day” may be dedicated to Tri Gelbman (Jessica Roth), who finds herself in a time loop, reliving the same day over and over again, and then she is killed. Three starts chatting with Carter Davis (Israel Broussard) because she keeps waking up in bed in his dorm room. Carter soon finds himself on her side, wondering if she can solve her own murder.

Three and Carter have a clear chemistry throughout the movie, and at the end they kiss and seem to fall in love with each other. While some Blumhouse horror films are overrated, “Happy Death Day” is very interesting and touching, watching Carter care so much about Tri and want to be by her side in this strange situation.

Dave Franco’s directorial debut “Rent” is not only a great horror movie, but also a fascinating love story. Michelle (Alison Brie) and Charlie (Dan Stevens) are married, but the relationship between them is not perfect, as Charlie sleeps with Mina (Sheila Vand), the girlfriend of his brother Josh (Jeremy Allen White).

The main characters discover that a camera is hidden in the bathroom and realize that they are being watched, and the film has a particularly terrible ending with an interesting twist. But until then, Josh and Michelle can tell that something is wrong with their partners, and watching this drama unfold is as much fun as seeing someone harass and kill people who are staying on vacation or on weekends.