Home Entertainment 5 Horror Movies about Witchcraft that are Worth Watching 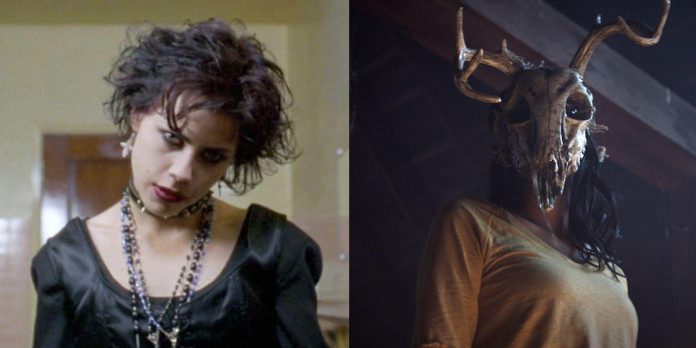 There is something fascinating about witches and witchcraft, and many movies have been made about the occult. As a subject, dark magic is open to all genres and audiences — including children (Hocus Pocus, Harry Potter) — but its mature themes make it a perfect fit for horror.

Dark magic has the same purpose to incite fear and terror, and that is exactly what the titles below do. These horror movies use the history and practices associated with witchcraft to bring the terror and nightmares to their viewers, and are must-see films for supernatural horror fans.

The Craft is a stylish teen horror movie directed by Andrew Fleming, about a group of witches at a Los Angeles Catholic high school. Originally a group of three, Nancy (Fairuza Balk), Bonnie (Neve Campbell), and Rochelle (Rachel True) seek a fourth member to complete their rituals and find one in transfer student Sarah Bailey (Robin Tunney). With the coven complete, the witches’ powers are stronger than ever, but Sarah is concerned they’ve become corrupt.

Fans of Heathers and Mean Girls will love The Craft, which is equal parts thrilling and funny. Released over twenty years ago, the movie has since become a cult classic, receiving praise for its feminist message and fantastic cast. Fairuza Balk, responsible for the iconic line, “We are the weirdos, mister,” is particularly brilliant as Nancy, and fans of the original will be happy to see her (brief) return in Zoe Lister-Jones’ The Craft: Legacy (2020).

Presented as a real-life documentary within a documentary, The Blair Witch Project is Eduardo Sánchez and Daniel Myrick’s horror movie about three student filmmakers — Heather Donahue, Joshua Leonard, and Michael C. Williams — who venture into the Maryland forest to cover the Blair Witch incidents. What starts as a fun project soon becomes a living nightmare when the group lose their map and find themselves lost in the woods.

Produced with a budget of $60,000, the movie grossed $248.6 million at the global box office, making it one of the most profitable indie horror movies of all time. The Blair Witch Project also held the record for the highest-grossing debut for a writer-director based on an original screenplay until 2017, when it was beaten by Jordan Peele’s Get Out. But most importantly, The Blair Witch Project revived the found-footage genre and showed that atmosphere is everything in a horror movie.

Robert Egger’s feature directorial debut, The Witch, follows a Puritan family in 1630 New England who leave their village over a religious dispute and come to settle in the woods. Soon strange things start happening, and when the youngest son Samuel goes missing, all eyes are on the oldest daughter Thomasin (Anya Taylor-Joy), whose mother (Kate Dickie) starts the rumor that she’s a witch.

The Witch is one of A24’s most successful horror movies and marked the studio as one to watch. Both a critical and financial success — the movie grossed $40 million against a $4 million budget — it also catapulted Anya Taylor-Joy to fame and won her several awards, including the Gotham Award for Breakthrough Actor. The Witch is another example of a great atmospheric horror movie, for it relies on suspense to scare audiences and does so successfully.

A remake of Dario Argento’s 1977 cult classic, Suspiria is director Luca Guadagnino’s supernatural horror movie about a world-renowned dance company, and the young American dancer, Susie Bannion (Dakota Johnson), new to it. Set in 1970s Berlin, the movie sees Susie land the role of lead dancer and grapple with accusations of witchcraft against the company’s female directors.

Although Guadagnino’s Suspiria is rated poorer than the original, it has many stand-out elements, one being its soundtrack, scored by Thom Yorke of Radiohead. An unexpected choice of composer, but a brilliant one nonetheless, Yorke’s score is hauntingly ethereal and his song “Suspirium” was even nominated for Best Song Written for Visual Media at the 62nd Annual Grammy Awards. The cinematography provided by Sayombhu Mukdeeprom is just as stunning as the original.

The Wretched is a low-budget indie horror directed by the Pierce Brothers and starring John-Paul Howard as Ben, a defiant teenager who moves to live with his father (Jamison Jones) following his parents divorce. There, he discovers that his neighbor (Zarah Mahler) is possessed by a thousand-year-old witch. Befriending teenage colleague Mallory (Piper Curda), Ben ropes the latter into helping him take down the witch and chaos ensues.

The Wretched had its world premiere in 2019 and was set for theatrical release in 2020 when the pandemic hit. With cinemas shut down, the movie’s distribution company, IFC films, opened The Wretched up to drive-ins, ultimately saving the movie and making it the first since Avatar (2009) to top the box office for six consecutive weeks. The movie itself might not be groundbreaking, but it is well worth watching for fans of popcorn horrors.

Shuumatsu no Harem finally has a return date