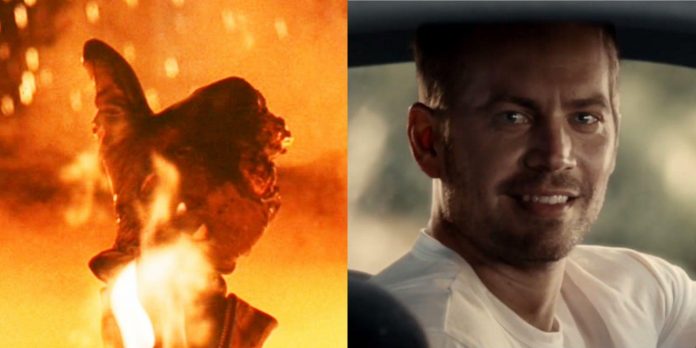 Audiences don’t usually cry at action movies. The goal is to draw viewers to the edge of their seats with thrilling set-pieces, not bring them to tears. But just because a movie has explosions and car chases, it doesn’t mean it can’t also resonate on an emotional level. In fact, the dangerous situations that action heroes end up in lend themselves to a vulnerability that audiences can connect with. From the death of Goose to the death of John Wick’s puppy to Brian O’Conner’s final race with Dom Toretto, plenty of tearjerking action movie moments have broken fans’ hearts.

The Puppy Murder In John Wick

In countless generic revenge thrillers, gangsters murder a hitman’s entire family to motivate his vengeful rampage. In John Wick’s ingenious inciting incident, the titular assassin is inspired to return to a life of violence by the brutal murder of the puppy left behind by his late wife. Audiences are much more heartbroken by the death of an adorable little dog than any number of human beings. After John’s dog is killed, fans get behind his relentless bloodbath. They don’t care how many people he has to kill to bring that dog to justice. Even the stoniest of viewers are devastated by the shot of John cradling the corpse of the only thing left in the world that gave him any semblance of happiness.

“I know now why you cry, but it’s something I can never do.” At the heartbreaking climax of Terminator 2, in order to ensure that Skynet can never rise up and destroy the human race, the T-800 that spent the movie protecting John Connor lowers itself into a vat of molten steel. John begs him not to go, but he doesn’t have a choice. Some cynical fans felt that the thumbs-up was a little corny, but more optimistic viewers are deeply moved by the Terminator’s sacrifice.

This scene is the perfect resolution to the T-800’s father-son dynamic with John. The cyborg had to smelt itself to save humanity, but in its final moments, it lets John know that he was successful in teaching him how to feel. Not only is James Cameron’s sequel bigger, bolder, and more exhilarating than its predecessor; it’s more emotionally engaging, too.

Mathilda Finds Her Family Dead In Léon: The Professional

Natalie Portman made her acting debut as a preteen assassin in Léon: The Professional. Portman nailed the action movie badassery, but she also nailed the complicated emotions of a 12-year-old losing her entire family. After being orphaned by sadistic DEA agent Norman Stansfield, Mathilda returns home and finds her parents and all her siblings dead in a horrifying bloodbath. With nowhere else to turn and no one else to turn to, she goes to her neighbor Léon’s door, crying out for help. He reluctantly takes her in and trains her as his protégé in the trade of contract killing, allowing her to seek revenge for her devastating loss.

The Death Of Goose In Top Gun

Tony Scott’s original Top Gun offers a spot-on blend of explosive military action and touching melodrama. Critics accused Top Gun of being thinly veiled naval propaganda – and it didn’t help that the U.S. Navy reportedly sent recruiters to theaters to sign up adrenaline-filled fans on their way out of the movie – but above all, it’s a heartbreaking story about friendship. The dogfight sequences might glorify warfare, but the core of the narrative is Maverick’s undying love for his wingman and best bud, Goose.

In the film’s most shocking sequence, Maverick loses Goose in a dogfight gone horribly awry. As they crash into the water below, Maverick cradles his buddy’s lifeless body, still in shock. Top Gun is remembered as the pinnacle of ‘80s cheese, but there’s nothing cheesy about this scene; it’s harrowing.

When Paul Walker tragically passed away in the middle of filming Furious 7, the script had to be drastically rewritten. Instead of just reworking the story to feature Walker’s character Brian O’Conner less prominently, the Fast & Furious team went one step further and retooled the entire movie as a heartfelt tribute to the late actor. Considering the obstacles faced by the filmmakers, Furious 7 couldn’t have been handled more beautifully.

Wiz Khalifa’s “See You Again,” written specifically for the movie as a salute to Walker, plays on the soundtrack as Dom and Brian engage in one last street race. There isn’t a dry eye in the audience as Brian turns off the highway and bids farewell to his brother. Furious 7 provided the perfect send-off for both the beloved actor and his beloved character, and would’ve been a fitting ending for the entire Fast & Furious saga if Universal didn’t have dollar signs in its eyes.