Home Entertainment 5 Games That Can Be Similar to Haunted Chocolatier 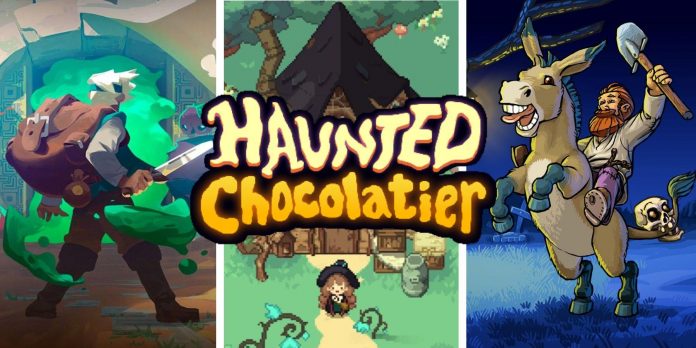 Haunted Chocolatier is the upcoming game by developer ConcernedApe, who is known for creating the cozy farm simulator, Stardew Valley. Even though the new title has yet to get an official release date, plenty of fans are excited for it. ConcernedApe’s hints about Haunted Chocolatier reveal that it will still feature fantastical elements and a friendship system, but it will also focus more on combat. As such, the title’s gameplay loop will likely be quite different from Stardew Valley’s.

Admittedly, there isn’t much to go on yet, though it’s interesting to look at what games might be like Haunted Chocolatier when it releases. Not counting Stardew Valley, the games listed below could be similar to Haunted Chocolatier, whether it’s in the setting, the gameplay, or even just the general vibe.

RELATED: How Haunted Chocolatier Can ‘Channel the Energy of the Moon’

As the name implies, Graveyard Keeper is a management sim where the player must look after a rundown cemetery. This entails general upkeep, such as keeping gravestones in tip-top shape and dealing with the new arrivals. They’ll also have to tend to their homestead and the rest of the cemetery grounds. The game is set in a medieval town, complete with countryside landscapes, a bustling tavern, and ritualistic witch burnings.

Garden Story takes place in a forest village known as the Grove, and the player is its newest guardian. They must combat “the Rot” that seeks to take over the village, all while building the community. Garden Story is combat-heavy in terms of gameplay, somewhat like Haunted Chocolatier. To improve the village and uncover its secrets, the player must fight Rot monsters inhabiting specific locations of the Grove.

Though, unlike Graveyard Keeper, Garden Story leans more into the cute, cozy vibe. It features adorable vegetable characters and a warm pixelated art style. Even the infested areas of the game are presented with a similar visual style — the only differences being the darker color palette and more weird elements. This is comparable to what players saw in Haunted Chocolatier’s early gameplay trailer, except, in this case, it was the primary game area that was dark, while the combat areas seemed much brighter.

Moonlighter is a rogue-lite game that is the most similar to Haunter Chocolatier on this list, at least in terms of its premise. This is because the main character is a shopkeeper and adventurer. The main gameplay loop entails adventuring across different worlds to collect weapons, armor, and other such artifacts, then returning home to put them up for sale.

Like Haunted Chocolatier, there are plenty of ways to fight enemies. The player can choose between swords, daggers, bows, and other such tools for combat. There’s even a community-building aspect that allows the player to establish new businesses in their hometown and recruit followers. As for the shopkeeping side of things, players are tasked with pricing their items, managing profits, and upgrading the overall store. They can even recruit assistants to look after the shop while they’re gone, similar to how the player in Haunted Chocolatier gets help from the little ghosts.

Voodoo Garden is a simple farming simulator like Stardew Valley, but with a distinctly Haunted Chocolatier vibe. As the title implies, the player is tasked with caring for their own mystical garden, settled in the middle of a bustling swamp. The garden then produces ingredients for the player’s various voodoo supplies. A few animal spirits also come by to help with tending to the garden, not unlike the little helpers in Haunted Chocolatier.

It’s worth noting that Voodoo Garden is a point-and-click game, unlike the last few items in this article. So, while its general feel and aesthetic may be similar to Haunted Chocolatier, its gameplay is quite different. Still, like the other games mentioned, Voodoo Garden challenges the player to unlock all the items in the game — from plants to pets and even totems. Overall, it’s a short but sweet simulation game with a cozy aesthetic.

Little Witch in the Woods

Little Witch in the Woods follows the story of Ellie, an apprentice working hard to become a fully-fledged witch. To do this, the player needs to familiarize themselves with potions, collect the right ingredients, and help out the locals of the nearby town. They can even befriend these characters to learn more about their backstories. The game’s cute visual style is reminiscent of Stardew Valley, but its premise leans more into the mystical, like Haunted Chocolatier.

That said, it’s worth noting that Little Witch in the Woods is still an early access game. While it offers a pretty enjoyable experience, there are still a few bugs that need to be patched out, but the developer is working hard to do just this. Other than that, Little Witch in the Woods is a fun little game that is easily comparable to the fantastical nature of Haunted Chocolatier.

Though there haven’t been a lot of updates on Haunted Chocolatier recently, fans can opt to try other games that are somewhat similar to the upcoming title. These could very well fill that gap of cozy, mystical management simulator games. If it doesn’t scratch the Haunted Chocolatier itch, it could still lead to some genuinely fun and unique gaming experiences. And hopefully, ConcernedApe makes an announcement on the status of Haunted Chocolatier soon, at least to give players a better idea of what to expect from it.