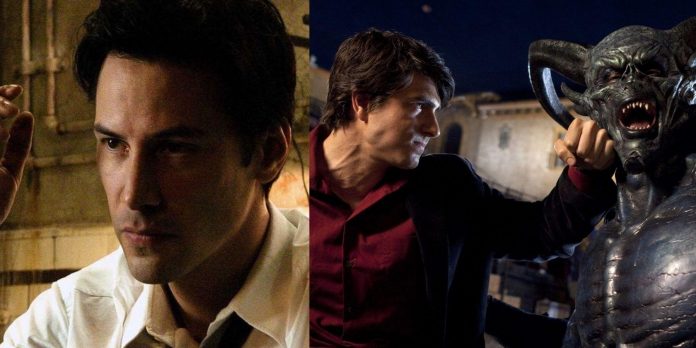 Detective movies are most often based in reality. As such, they contain no supernatural elements. Instead, they tend to rely on the intricacies of the criminal case the detective is trying to solve. Fantasy movies, on the other hand, aren’t as focused on realism.

So when these two seemingly opposite approaches join together, the result can lead to an unusual movie. Occult detective movies aren’t still as common as they would deserve to be, considering their popularity among the general audience. The good news is that anybody interested in this genre has the option to pick from multiple fantastic movies that are worth watching.

Dylan Dog: Dead of Night is an underrated movie that, nevertheless, can charm the audience if they don’t expect too much from it. The titular Dylan Dog (Brandon Routh) works as an investigator, and rhas promised to try and solve the case that might be too much even for him. When occult creatures are involved, the danger is high, and Dylan might not make it if he’s not careful enough.

The less the audience knows about the plot before watching the movie, the better, because it offers more than one surprising twist. Brandon Routh clearly enjoyed the part, and he gives a strong performance. Dylan Dog: Dead of Night combines horror, action, and occasional humor, and creates a coherent whole that will entertain everyone who likes occult creatures — as the movie features more than one type of supernatural being.

Both Ryan Reynolds and Jeff Bridges have had bigger hits as well as better movies, but the comic book-inspired R.I.P.D. features a clever idea as well as a sense of humor. Not every occult detective movie manages to be funny, but R.I.P.D. is one of the few exceptions. What also makes the movie unusual is that its main hero is, in fact, originally one of the bad guys. It’s only after he dies and joins the undead criminal force that he manages to turn his life around. Ryan Reynolds gives a solid performance, but Jeff Bridges steals the show as Sheriff Roy Pulsipher, who prefers to shoot first and ask questions later.

That might seem dangerous, but in a world full of undead monsters, Pulsipher and his new colleague Nick (Reynolds) have to give it their best if they want to succeed. The movie offers an original interpretation of what can happen after death, and it’s a must-watch for fans of the leading actors. R.I.P.D. is currently streaming on Netflix, making it easy to access. With an average rating, it’s still good enough to function as a guilty pleasure movie. If that wasn’t enough, it also works as a buddy cop story.

Based on a successful manga, the 2014 live-action adaptation got average ratings and mostly flew under the radar. Despite that, it’s a better movie than people might judge based on its ratings. It’s true that the anime version is more popular, but anime is a more specific genre that’s not as easily accessible to general audiences. As such, this movie presents a good bridge between the original material and the Western audience.

The movie centers on young Shiori, who has decided to get revenge for the death of her parents. To achieve her goal, she makes a deal with a demon. Together, they work to solve the mystery as well as several others. The movie has a scary feeling to it at times, and at others, it doesn’t shy away from humor. The leading actors — Ayame Gôriki as Shiori, and Hiro Mizushima as the demon Sebastian — are excellent, and the chemistry works between them. Black Butler successfully walks the fine line between crime and fantasy, and even though it’s oriented toward a younger audience, it has the power to entertain older viewers as well.

John Constantine is a familiar name to DC fans, as he’s the most iconic superhero and investigator of the occult all in one person. He’s also an accomplished magician and a sarcastic man with a British accent. The 2005 occult mystery changes John’s character, which is didn’t sit well with comic fans. Despite that, Constantine has a lot to offer. John is helping a new client, and discovers that this case has a connection with demonic forces. If he and policewoman Angela (Rachel Weisz) don’t stop the danger, it might lead to the destruction of the entire world.

The stakes are high, and John Constantine is far from invulnerable, which makes it easy to feel for him. The movie offers many well-known names. In addition to Weisz and Keanu Reeves in the titular role, it stars Peter Stormare as Satan himself and Tilda Swinton as Gabriel. Constantine has an intense atmosphere and is easily one of the best representatives of this genre, as well as one of the most terrifying adaptations of superhero comic books.

Tim Burton is no stranger to directing fantasy horror movies, but Sleepy Hollow is one of his most popular. Johnny Depp stars as Ichabod Crane, a constable who arrives in a small village to solve a series of murders. The locals believe the murderer is the Headless Horseman, but Crane is skeptical at first.

The movie creates a strong gothic atmosphere and puts the occult (represented by the Headless Horseman as well as by the villagers’ beliefs) into direct contrast with the rational (Crane’s initial opinion that the murders can be logically explained). The movie features many excellent actors. Alongside Johnny Depp, it also includes the likes of Christina Ricci, Miranda Richardson, and Michael Gambon. It was nominated for three Oscars and even won one. Unlike other crime occult movies, it has aged well, and is just as impressive as it was when it was released more than twenty years ago.