Home Entertainment 5 Actors Who Could Play Magneto in the MCU 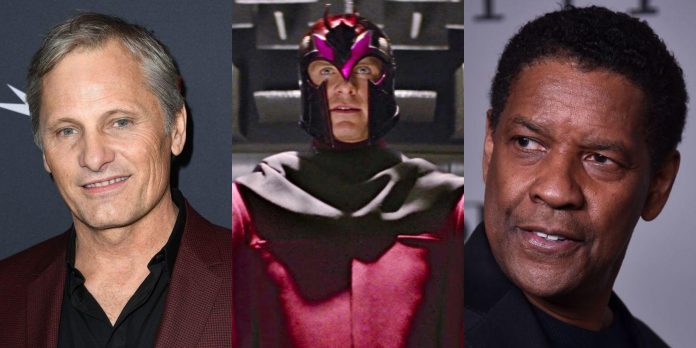 Aside from Doctor Doom and Galactus, the villain who fans are most eager to see adapted to the Marvel Cinematic Universe is without a doubt Erik Lehnsherr, aka Magneto — the iconic nemesis of the X-Men. After all, with Patrick Stewart’s Professor X making a cameo in Doctor Strange and the Multiverse of Madness, it’s easy to imagine that his friend-turned-rival won’t be too far behind.

Magneto is one of the few comic book characters lucky enough to get not one, but two brilliant live action portrayals in the past two decades. Sir Ian McKellen and Michael Fassbender will be hard acts for any performer to follow, to say the least. However, there are a few actors who could bring Marvel’s mighty mutant Master of Magnetism to life in the not-too-distant future.

RELATED: X-Men: Why We Need Another Dark Phoenix Movie

Admittedly, this first pick is cheating a bit. But after Spider-Man: No Way Home brought back Willem Dafoe’s Green Goblin and Alfred Molina’s Doctor Octopus, it’s not hard to imagine Marvel Studios going a similar route with Magneto and simply having Michael Fassbender reprise his role — not as a multiversal variant of Magneto, but as the MCU’s own native incarnation of Erik Lehnsherr. After all, he’s widely considered to be one of the best parts of X-Men: First Class and its sequels, delivering the exact fusion of regal sophistication and vengeful rage that any good adaptation of Magneto needs.

The question is, of course, whether Fassbender would be willing to reprise the role. After all, he played Magneto four times within the span of seven years, only recently leaving the part after 2019’s disastrous Dark Phoenix. However, if Fassbender does indeed elect to return to the role of the Master of Magnetism, it would be good news for the countless fans of his portrayal.

One fan-favorite pick for the role of Magneto is Viggo Mortensen, best known for his role as Aragorn in Peter Jackson’s beloved Lord of the Rings trilogy. At 63, the silver-haired actor certainly looks the part of Erik Lehnsherr, so it’s not hard to see why so many fans would imagine him in the role. With the noble, kingly demeanor he brought to Aragorn, he’d likely be a good fit for Magneto as well — and considering the critical acclaim for his haunting performance in 2009’s The Road, he’s proven that he’d be able to do the character’s tragic side justice as well.

While Mortensen’s career may have slowed down since he left Middle Earth behind, he’s hardly out of the acting game. Just this year, he starred in the lead role of the David Cronenberg-directed sci-fi horror flick Crimes of the Future. He could very well make a return to fantastical blockbusters soon as one of Marvel’s greatest antagonists, and there would no doubt be plenty of excited fans if he did.

Few actors can play villains quite like Jason Isaacs. He’s likely best known for his role as Lucius Malfoy in the Harry Potter films, but he’s played bad guys in everything from The Patriot to Peter Pan to Avatar: The Last Airbender. He was the original Grand Inquisitor in Star Wars Rebels before Rupert Friend took the role in Obi-Wan Kenobi, and he even voiced Ra’s Al Ghul in the animated film Batman: Under the Red Hood. He’s proved by now that he’s one of the best performers there is when it comes to bringing classy yet ruthless antagonists to life.

But beyond that, it’s also important to note that Isaacs is Jewish — and as any X-Men fan knows, Magneto’s backstory as a Jewish Holocaust survivor is a crucial aspect of his character. Of course, neither McKellen nor Fassbender are Jewish, and they nevertheless delivered fantastic performances as the Master of Magnetism. Sharing the character’s heritage is certainly not a prerequisite for the role. But with his incredible talent for portraying cruel yet charismatic characters, it’s hard to find a more perfect fit for Magneto than Isaacs.

Speaking of Jewish actors, Adrien Brody may seem like an odd choice for Magneto at first. After all, he’s commonly known for roles like the mild-mannered writer Jack Driscoll in Peter Jackson’s King Kong, or Salvador Dalí in Midnight in Paris — not exactly the most intimidating villains. However, Brody’s had his share of villainous roles as well. He certainly can go over-the-top, as proven by his turn as Dimitri in Wes Anderson’s The Grand Budapest Hotel. Meanwhile, he’s practically unrecognizable as the ruthless, terrifying mobster Luca Changretta in Peaky Blinders.

While it may seem unlikely that an accomplished actor like Brody would take a role in a mainstream Hollywood franchise, his role in Predators shows that he isn’t above starring in action blockbusters. Plus, he already has experience playing a Holocaust survivor in The Pianist. He may look like an unlikely choice for the Master of Magnetism, but Adrien Brody could very well be an excellent Magneto.

For several years now, it’s been rumored that the MCU could do away with Magneto’s history as a Jewish Holocaust survivor, updating the character’s backstory and casting a Black actor in the role. These rumors have yet to be verified, but whenever they’re brought up, the name that almost always gets mentioned alongside them is Denzel Washington. And while the idea of erasing such an important aspect of the character is certainly controversial among fans, it’s hard to deny that Washington would make a great Magneto.

His villainous role in Training Day remains iconic to this day, while his background as a Shakespearean actor makes him ideal for capturing Magneto’s classy gravitas. And thanks to his role in The Equalizer, he’s also no stranger to action franchises. He may be an unorthodox choice, but if Marvel Studios does indeed intend to cast a Black Magneto, it’s hard to do better than Denzel Washington.