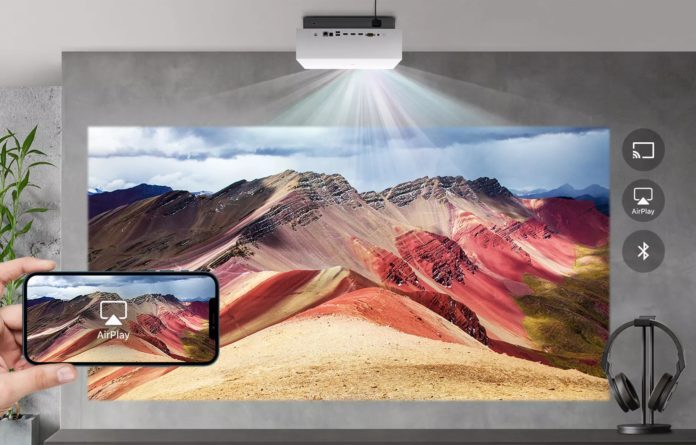 HU810P, the product announced by LG at CES 2021, supports Apple’s AirPlay 2 standard. This new 4K laser projector powered by webOS 5.0 is available with a price tag of $ 2999. It will be available all over the world on January 18. As AVSForum previously reported, this projector was first announced last August. Details about the LG 4K projector model are in our news.

The LG HU810P is able to create a 300-inch screen from corner to corner and offers 2,700 ANSI lumens of brightness. It supports HDR10 and HLG HDR standards and can adjust its picture according to the content you’re watching or the room you’re watching. For example, it has Bright Room and Darkroom modes that can detect the amount of ambient light in a room and adjust its picture accordingly. Moreover, you can set the frame rate to 24 Hz for movies. The laser light source is rated for 20 thousand hours of use.

The webOS 5.0 enables the projector to natively support a streaming service including Disney Plus, Netflix, Amazon Prime Video, YouTube and Hulu. And there is also Miracast support for streaming from compatible devices. Apart from that, there are a total of three HDMI ports that can be used for video transmission, one of which is HDMI 2.1. The projector supports eARC for high quality sound. It can stream audio using Bluetooth. There’s also support for built-in Google Assistant and Amazon’s Alexa voice assistant.

LG launched the first 4K projector in 2018. In 2019, it released a short-range model that works even if you place it just a few centimeters from the projection surface.