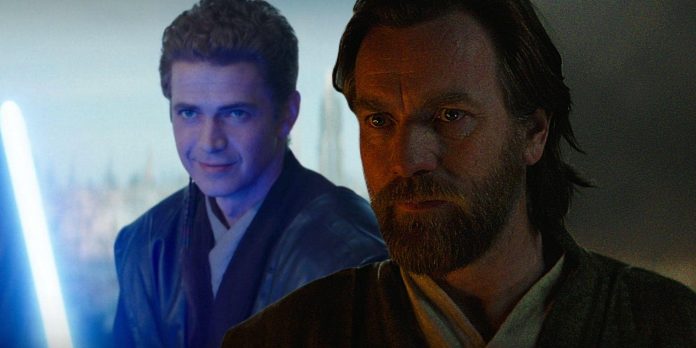 Obi-Wan Kenobi saw the returns of Ewan McGregor and Hayden Christensen for the first time since Star Wars: Episode III – Revenge of the Sith, but there are other future Star Wars projects in which the actors could reprise their roles. While the current Star Wars movies in development, such as Patty Jenkins’ Rogue Squadron and Taika Waititi’s untitled Star Wars project, are trying to move the franchise beyond the Skywalker saga, the Star Wars shows on Disney+ are still very much connected to the events of the original trilogy, the prequels, and the sequels.

As Star Wars: Episode I – The Phantom Menace was going back to the beginning of the journey of Anakin Skywalker, Ewan McGregor was chosen to play a younger version of Sir Alec Guinness’ character in the original trilogy, Obi-Wan Kenobi. In Star Wars: Episode II – Attack of the Clones, after the ten-year time jump, Hayden Christensen was cast as Anakin Skywalker. Although the prequels were received with a lot of criticism in the early 2000s, today’s audiences have a greater appreciation for the prequel trilogy. That is why there was so much anticipation for Ewan McGregor to play Obi-Wan again in his solo series and for Hayden Christensen to finally play Darth Vader and not just Anakin.

With only six episodes, Obi-Wan Kenobi found a way to deliver on much of what audiences could expect from an Obi-Wan show set between the Star Wars prequels and the original trilogy. However, as the timeline of the story gets closer to the events of A New Hope, the possibilities for untold stories of Obi-Wan and Darth Vader are reduced. Still, there are at least four shows in which Ewan McGregor, Hayden Christensen, or both of them could reprise their famous Star Wars roles. Considering how enthusiastic both actors have been with their return to Star Wars, plus how well-received movements like Obi-Wan Kenobi’s flashback scene have been, it’s likely that Lucasfilm intends to keep McGregor and Christensen as part of the franchise. Here’s where they could return.

When Obi-Wan Kenobi was first announced, the show was described as being a limited series – which made sense. There were initially plans for an Obi-Wan movie, but after the failure of Solo: A Star Wars Story and the success of The Mandalorian, the story was reshaped into a TV series for Disney+. However, during the press tour for Obi-Wan Kenobi, Ewan McGregor has said a couple of times that he wants to continue playing the character. In fact, during Star Wars Celebration 2022, McGregor jokingly said that he hopes people enjoy episodes “3, 4, 5, and 6, and 7, and 8” of Obi-Wan Kenobi – when in fact, season 1 only has six episodes. Obi-Wan Kenobi was the biggest premiere not only of all Star Wars TV shows, but also of any Disney+ original, and if the numbers for the show continue to be as good, then an Obi-Wan Kenobi season 2 will surely be considered. Even if Obi-Wan Kenobi and Darth Vader cannot keep running into each other before A New Hope, Hayden Christen could also return as Darth Vader in a possible season 2, although in a more limited role or just as Anakin Skywalker in flashbacks.

Ahsoka is set in the same era as The Mandalorian, meaning that the show takes place almost a decade after the deaths of Obi-Wan and Darth Vader. Still, it was reported in 2021 that Hayden Christensen will appear in Ahsoka, and there are at least two ways for his return to make sense. One is through flashbacks of Anakin and Ahsoka during the events of the Clone Wars. The Obi-Wan Kenobi flashback of Anakin training with Obi-Wan proved that Hayden can still pull off a prequel-era Anakin visual, which could look even better in the older version seen during Revenge of the Sith. The other possibility is that present-day Ahsoka manages to speak with Anakin’s Force ghost. Should that really happen, Star Wars would be going back to one of George Lucas’ most controversial changes made to the original trilogy in the Star Wars Special Editions – the replacement of Sebastian Shaw for Hayden Christen as Anakin Skywalker in Return of the Jedi. As such, Ahsoka would have the opportunity to better explain how Anakin became a Force ghost — something that only comic books and novels have so far explored.

While nothing has been said about Obi-Wan and Darth Vader in Andor, the Rogue One: A Star Wars Story spinoff is set during a time in which both Ewan McGregor and Hayden Christensen could easily reprise their roles – five years before the events of A New Hope. As Andor will explore more of the inner works of the rebellion and of the life under the Empire, Darth Vader could be one of the antagonists of the show. While the Emperor usually keeps the Sith Lord as the last resource thing, the sparkle of a Rebel alliance could be enough for Palpatine to dispatch Darth Vader on a hunting mission.

That said, Darth Vader cannot really be the main villain of Andor, as the show is much more of a spy thriller focused on Cassian Andor and other Rebels such as Mon Mothma. Finding a role for Obi-Wan in Andor would also be difficult, as Star Wars Rebels reveals that the Rebel Alliance believed that Kenobi was dead. Still, Andor could reveal Obi-Wan was helping the Rebels as much as he could in a secret capacity.

Tales of the Jedi

Ewan McGregor and Hayden Christensen never got to voice Obi-Wan and Anakin in an animated series, and Tales of the Jedi could finally offer that opportunity. While Star Wars: The Clone Wars’ Matt Lanter is already confirmed to return as Anakin in Tales of the Jedi season 1, the show is being treated like an anthology series that does not follow the structure and the style of Clone Wars. That means a future season of Tales of the Jedi could feature Ewan McGregor and Hayden Christensen, even if it is a one-off role, as a way to welcome the live-action Obi-Wan Kenobi and Anakin Skywalker actors in such an important part of the Star Wars legacy.