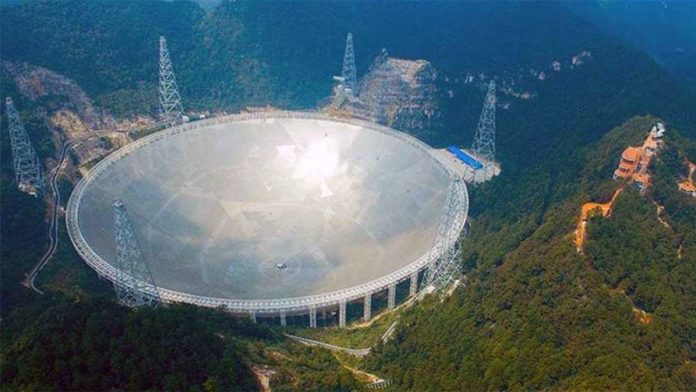 The test phase of the FAST radio telescope, which lasts 5 years and is equivalent to 30 football fields, is over. Chinese researchers announced that the telescope was officially in operation.

Scientists from around the world continue to explore space. Developing its work on space in recent years, China has completed the construction of the world’s largest radio telescope. The plant, which passed the tests successfully, was officially in operation.

The plant, which is located in the Guizhou district of southwest China, took 5 years to build. The total cost of the project is $ 180 million, “China’s eye in the sky” is used. The name of the facility was FAST.

38 GB of data per second
FAST is able to collect 38 gigabytes of data per second. The plant will look for weak pulsars in the galaxies, instantaneous radio waves from natural hydrogen and neutron stars, and will detect these signals to help them investigate life in space.

The telescope will not only be used by Chinese observers, but will gradually be made available to international astronomers. Thus, the facility will serve astronomy science worldwide.

Will be the pioneer of important discoveries
FAST chief engineer Jiang Peng, who made statements about the telescope, said FAST would enable him to make important scientific discoveries in the next three years. In the test phase of the plant, the sharpness and accuracy of detecting weak pulsars were emphasized, and 102 weak pulsars were detected in 3-year tests.

The FAST radio telescope is quite large. The total area of ​​the facility reaches 30 football fields. FAST, which is already the name of the facility, also means the five hundred meter Aperture Global Radio Telescope.

Group profiles on WhatsApp are changing! Here is the new design

Cobra Kai: Season 4 may not be the last