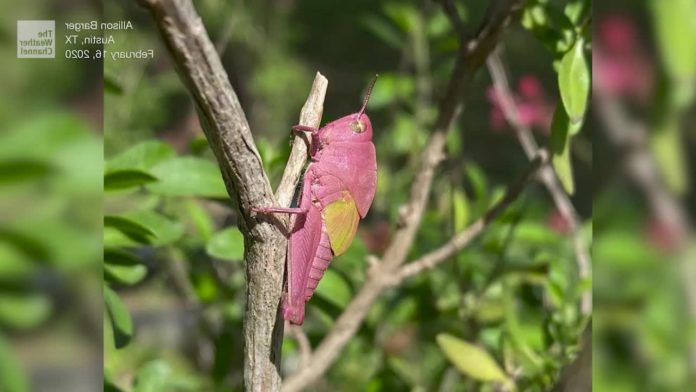 A 3-year-old boy in the US came across pink grasshopper in his garden. The child, who loves insects very much, spent a long time with intruders, which are rare in nature.

We see grasshoppers in green tones in general, and until now we thought they could only surprise us with their size. But the youngest son of a family living in the state of Texas, USA, showed that the grasshoppers may have a pink color.

A woman named Allison Barger, who lives in Austin, Texas, said that her 3-year-old son Brooks found a pink grasshopper in the garden of the house. “He spent his time saying how cute he was to the grasshopper. Until we searched the internet, we had no idea how rare it was.” said.

Pink locusts are the result of a genetic mutation called erythism, which affects a recessive gene similar to that causing albinism. Jared Ali, an entomologist from the University of Delaware, noted that the pink locusts have a recessive nature and are rarely found in wildlife. However, some experts think that pink color is a dominant feature in locusts, but they decrease over time due to the predators easily noticing them.

Ali said, “If you were a grasshopper-eating predator, you would have noticed pink grasshoppers better than green ones. It may be more difficult for pink individuals to live because they live in a green world.” said. He also added that pink grasshoppers may have emerged because of an environment where they would benefit from being pink.

Scientists Reprogrammed the Cells of a 114-Year-Old Woman