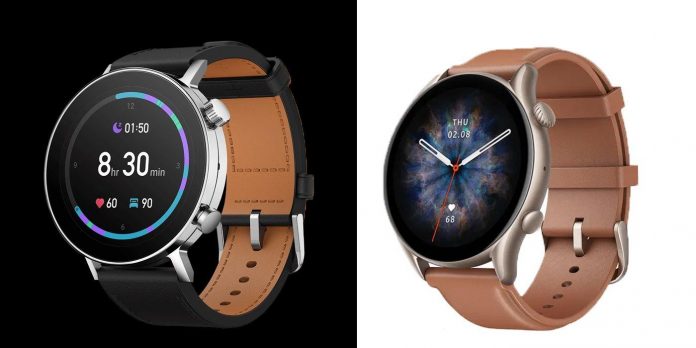 The Amazfit GTR 3 Pro Limited Edition smartwatch was discreetly listed on the Amazfit website, but how do they differ from the standard version? As part of the Amazfit smartwatch line, the GT series is at the top. These smartwatches come with square (GTS) or round (GTR) dials and offer impressive battery life compared to competitors.

RELATED: Amazfit GTS 2 vs. New version of GTS 2: What is the difference?

While the standard version has a thinner aluminum one-piece body, the new limited edition seems to be made of two pieces of metal, which provides considerable thickness. In addition, the ears, the rotating crown and the additional button look new. Another change made by Zepp is the color and choice of straps. The Amazfit GTR 3 Pro Limited Edition is available in Mystic Silver with a black leather strap or in Sleek Gold with a brown leather strap. In contrast, the Amazfit GTR 3 Pro is available in brown with a matching leather strap and in Infinite Black with a fluoroelastomer strap.

With the exception of these physical changes, the rest of the functions remained the same. The display is still a 1.45-inch Ultra HD AMOLED panel with a resolution of 480 x 480 and is protected by a sheet of tempered glass with a coating against fingerprints. It uses the same BioTraker 3.0 PPG sensor, which supports heart rate tracking throughout the day and measuring blood oxygen levels. There is also support for more than 150 sports modes with intelligent recognition of eight of them, as well as stress monitoring, menstrual cycle tracking, sleep tracking and temperature sensor. Those who enjoy hiking, climbing and skiing will find the limited-edition barometric altimeter useful for tracking atmospheric pressure. It also has a five-satellite navigation system for location tracking, 2.4GHz Wi-Fi and Bluetooth 5.0.

As with some other smartwatches, Amazon’s Alexa smart assistant is built-in, and when there is no internet, an offline voice assistant can be used for simple operations. When connected to the phone, users can receive calls on the smartwatch thanks to the microphone and speaker included in the kit. The battery life has also not changed compared to the standard version, which means that it will last up to twelve days without recharging (or six days with heavy use). The Amazfit GTR 3 Pro Limited Edition is already available for purchase in the US for $209, which is $20 more than the price of the standard version.