Home Science A 2,600-year-old tomb with rich content was found in Italy 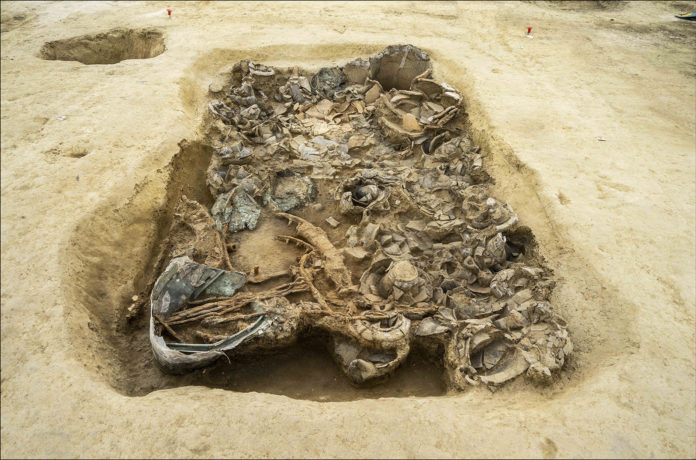 Archaeologists working in Italy, BC. They found a tomb that belongs to the 7th century. Researchers, who say that the owner of the grave is of the noble class, states that the materials such as guns and carts in the grave are the biggest proof of this.

Archaeologists working in the center of Italy found the remains of a iron carriage and a wheeled chariot inside the Iron Age. The tomb, which is very rich in content, also has a bronze helmet, stones made of bronze and clay, and plenty of weapons. On the other hand, the body of the owner of the tomb was destroyed a long time ago.

Archaeologists think that the tomb belongs to a man based on the combat vehicles inside the tomb. However, one of the archaeologists in the study, Federica Boschi, says that although the person’s body in the grave is missing, the materials found here reveal much about the person buried about 2,600 years ago.

The grave is thought to belong to one of the noble class:
“The extraordinary collection of cultural materials,” said Boschi, about the tomb found; he says that these materials provide definitive proof that the owner of the tomb is of aristocratic status. At this point, Boschi even thinks that the tomb may belong to a prince.

Archaeologists have found this grave found in Nevola River Valley by chance during researches before a new sports complex was built in the region. Airborne investigations over the town of Corinaldo revealed accurate evidence of the tomb.

This bird’s eye view showed large and circular moat remains. Archaeologists, who started to work after this rather strange image, started to work on the ground in the region. The team used a tool that sends electrical currents to the ground in the first place and monitors the abnormalities in the current’s flow from the ground. However, magnetic search tools were used to determine if there was any metal hidden underground.

The ruins in the grave were found in BC. It dates back to the 7th century:
As a result of these investigations, archaeologists realized that there was something buried under the ditches. Shortly after the excavations started, the grave and the accompanying ones were found. Boschi also states that the tomb was surrounded by a 30-meter circular moat with a curved mound. On the other hand, the grave itself is said to be smaller and 3.2 x 2.8 meters in size.

B.C. The tomb, which belongs to the 7th century, is thought to belong to the Piceni community, which was located along the Adriatic coast of Italy in the Iron Age. According to Encyclopedia Britannica, all the evidence, including those in this tomb, shows that the Picenni community is a warrior. According to another known information about the community, M.S. Being one of the most powerful empires of the period in 268, Rome succeeded in adding this community to its territory.

Boschi says it is very rare to find such a rich tomb belonging to the Iron Age. Archaeologists’ future plans include studying hundreds of objects in the tomb. It should be noted that the last study was published online in Antiquity magazine on January 23.