Logan Han, one of the most famous cryptocurrency traders, gave a new forecast for Bitcoin. Saying that Bitcoin started to give a bullish signal, the trader pointed to $ 20 thousand. Moreover, Logan Han, Binance’s leading trader, is not the only one who thinks so.

Logan Han, a digital asset manager and one of Binance’s leading traders, believes that Bitcoin will rise rather than lower. The trader shared the predictions of the route Bitcoin will follow in the coming weeks on his Twitter account and made a new forecast for BTC. According to the charts, Bitcoin can do much more than recover in the coming months. Logan Han also suggests that the Bitcoin price can exceed $ 20,000 by the beginning of the year with the graphics he shared.

Same as April – May Graphics

Logan Han pointed out that the graphics displayed by Bitcoin are similar to those of April and May, which preceded an uptrend from $ 9,000 to over $ 12,000. For this reason, Han says that it is almost impossible for the market to be dominated by the bears, and argues that BTC will experience a big jump after watching the 10 – 12 thousand dollar range in the near future. The trader also suggests that Bitcoin will run towards a new record towards the end of this year. 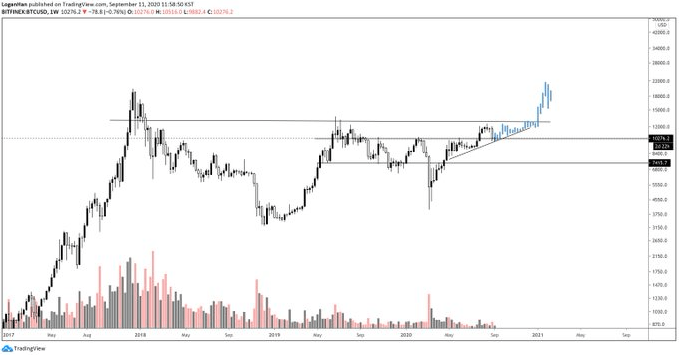 Many Advocates That Bitcoin Price Will Rise

In addition to Logan Han, names such as Bloomberg’s famous analyst Mike Mcglone argue that the Bitcoin price may be close to $ 20,000 by the end of this year. There are also names that make more predictions than those made by these names.

PlanB, known for its stock-flow (S2F) model adapted to Bitcoin, predicts $ 100,000 for the BTC price. If Bitcoin continues to make its way in accordance with the S2F model, the BTC price can go up to $ 100,000 by the end of this year. Timothy Peterson, on the other hand, took the scenario one step further, by publishing a chart in 2018, correctly predicting the $ 10 thousand level Bitcoin is watching today. Saying that his methods are based on mathematics and economic fundamentals, the analyst believes that the Bitcoin price could reach $ 1 million in 2028.

BTS victory in Mexico and wins in the Spotify Awards

How does approach payment work?

TXT shows the choreography for “Puma” and SEVENTEEN song